Autumn in the Kootenays

This weekend we headed east, hoping to find plenty of snow to camp in. We planned on exploring an area near the massive Arrow Lakes in the central Kootenays, and quickly found a suitable-looking forest service road to take us away from the highway and into more remote backcountry.

After a mere ten minutes on the logging roads we found a great place to load up on firewood, and as always cut and packed as much as we could fit. 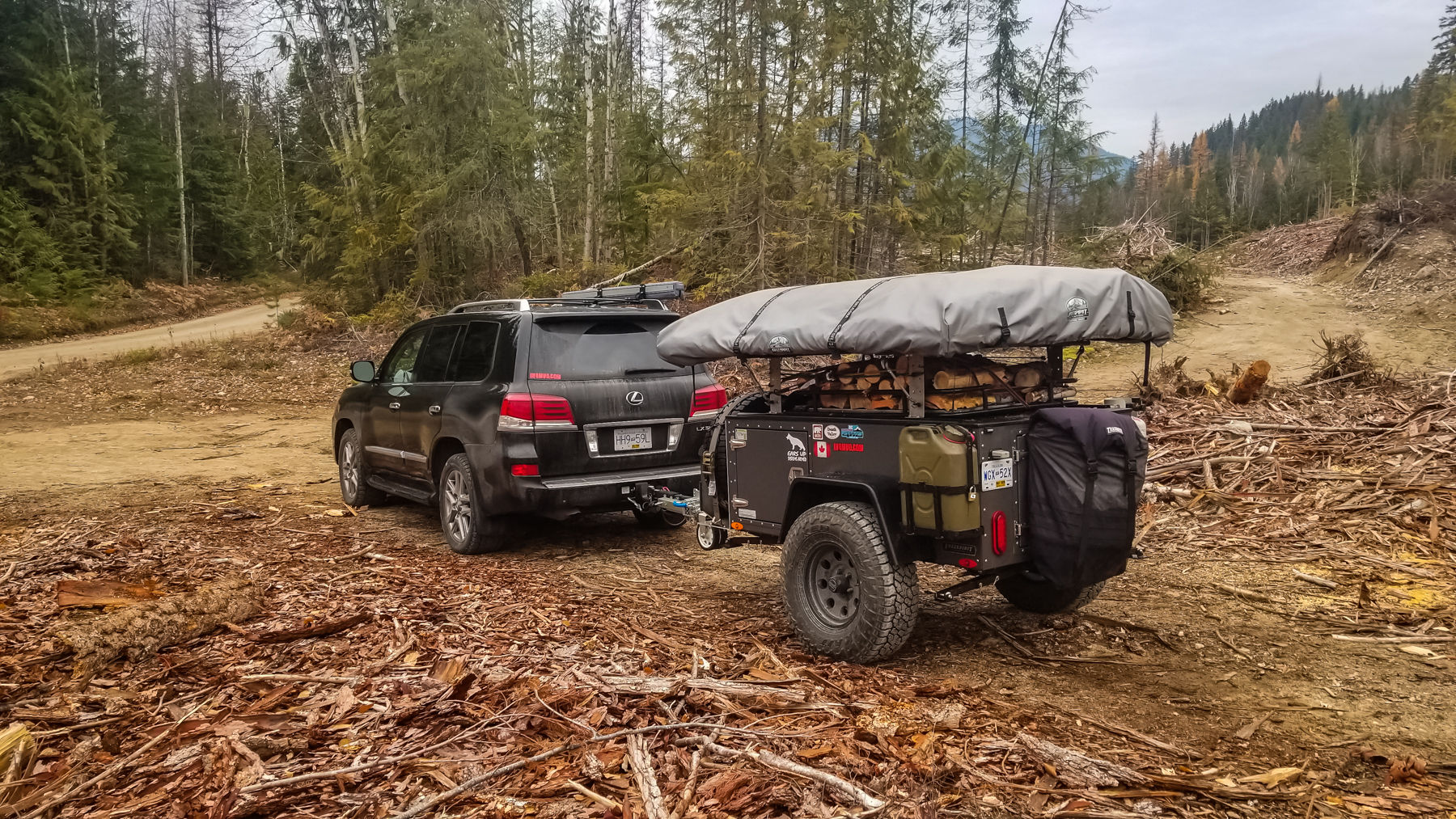 Another fifteen minutes further down the road and we saw a side trail leading in the direction of a lake. With no signs to advise against entry, we turned in and traveled down a few hundred metres to a pine needle-covered clearing with lake access. 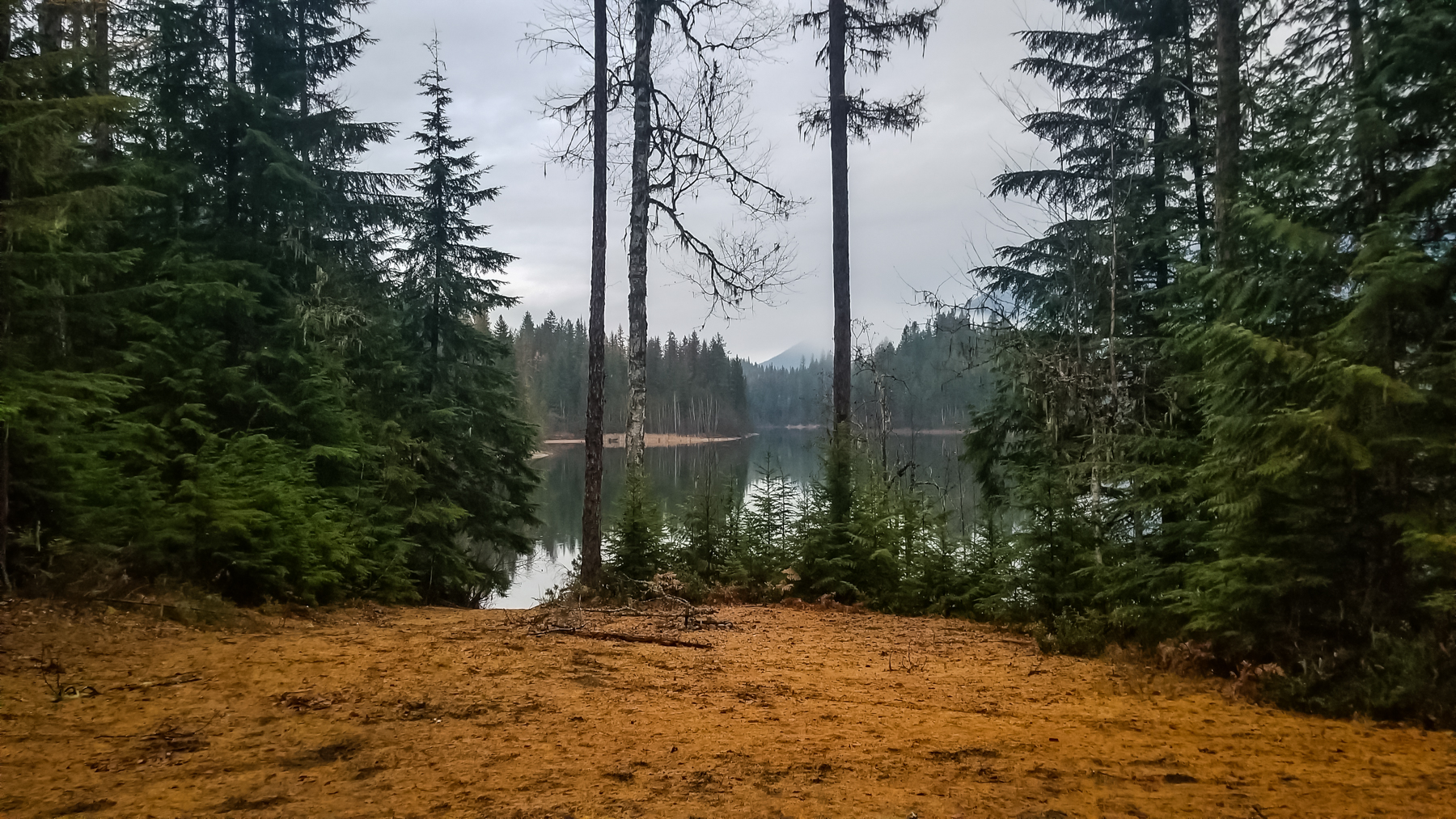 We setup camp and looked around, finding a few unusual items. 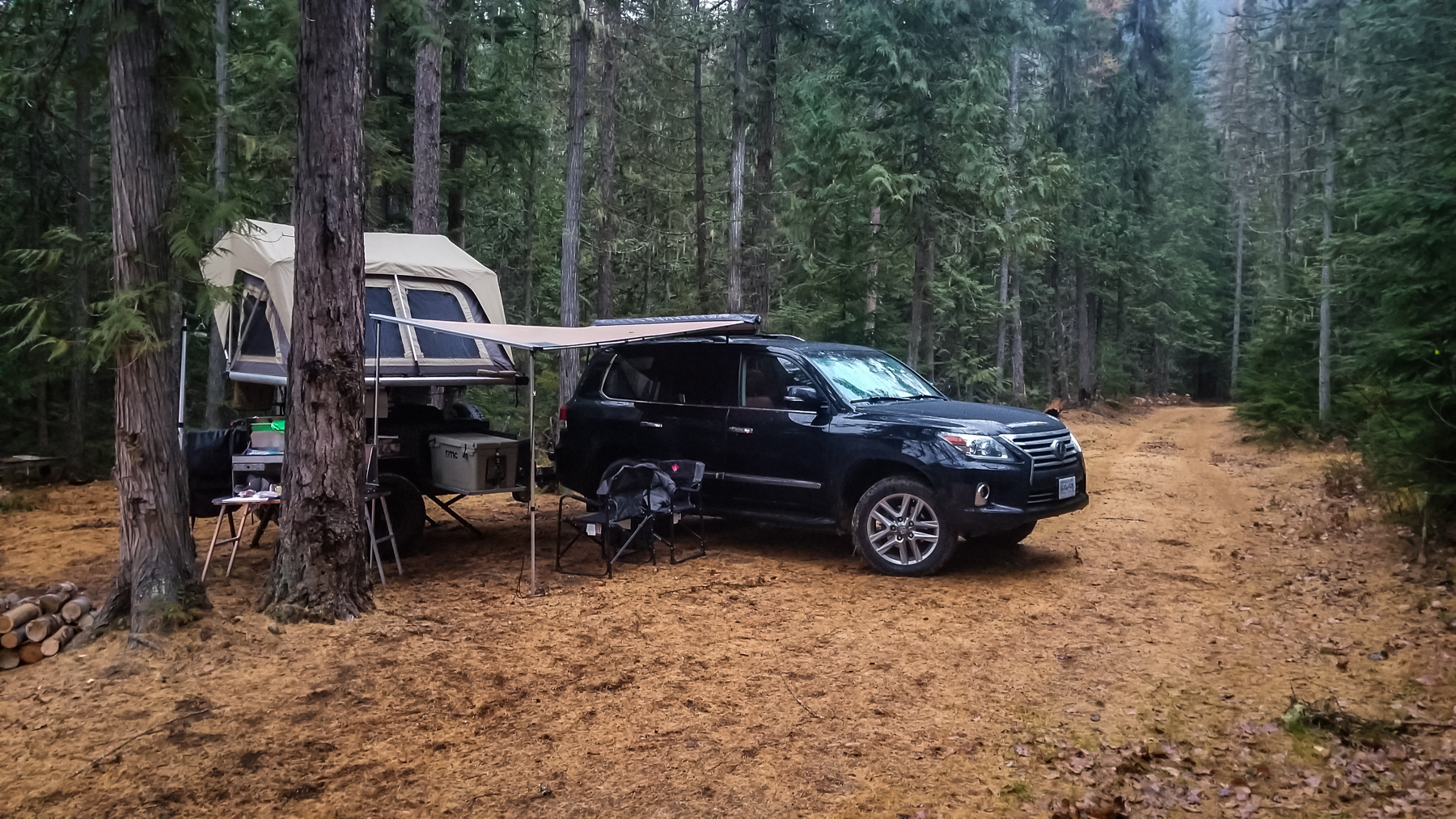 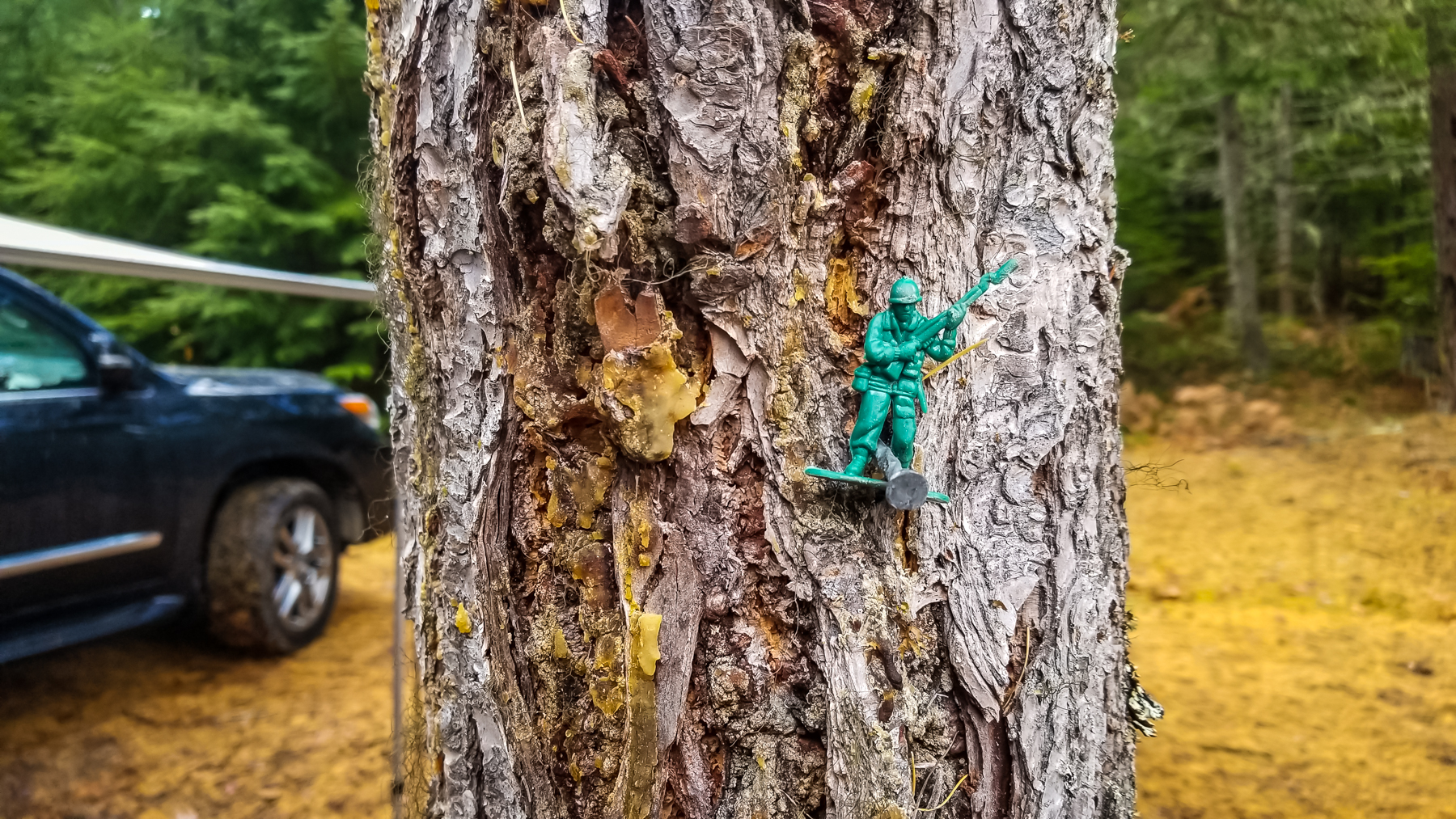 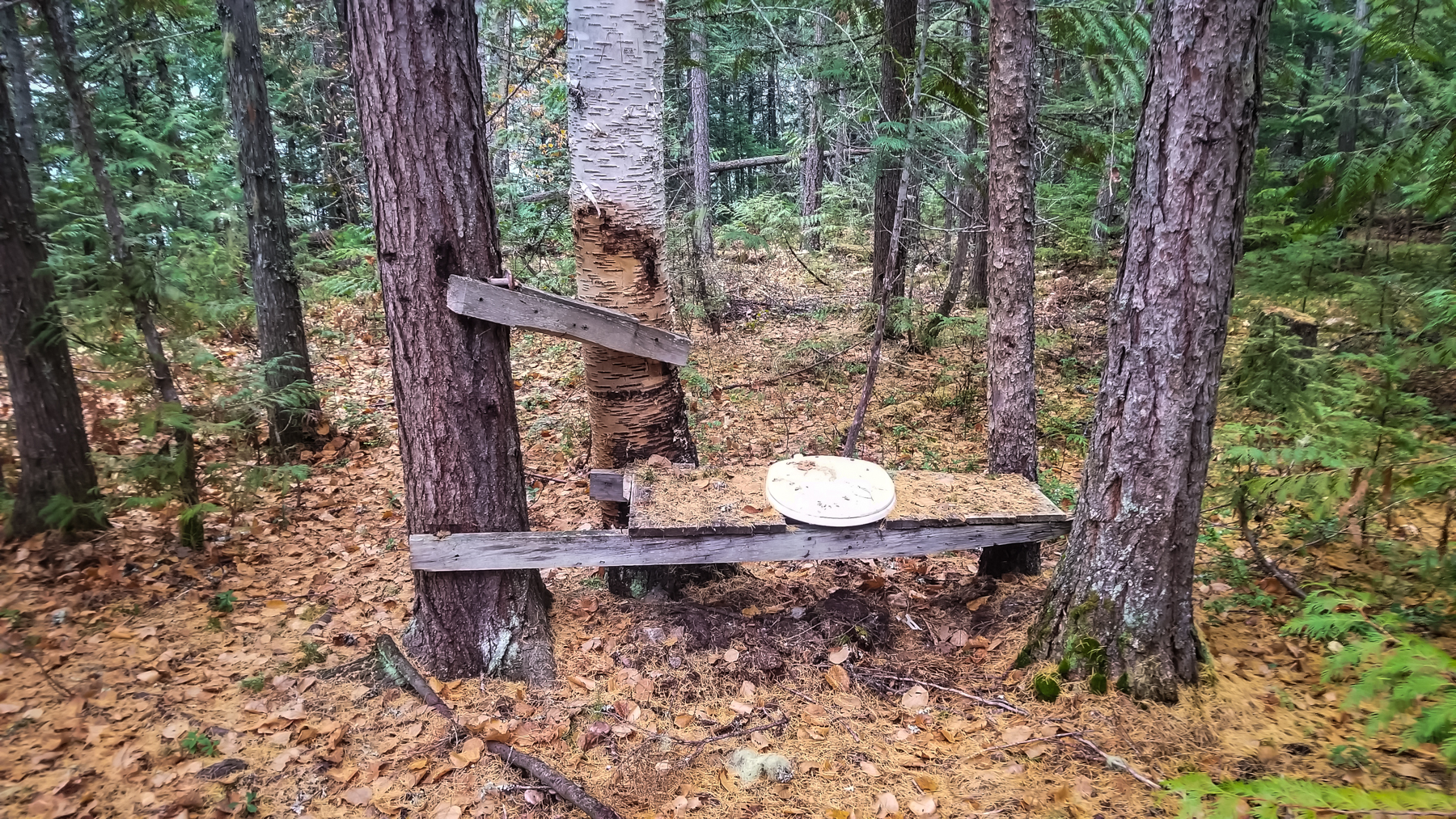 The vast amounts of needles on the ground should have served as a clear warning, but it was one we didn't understand until it was too late: the needles would come down like a snowfall with every breeze and fall not only over all of our gear, but also into every single cup, pan and plate, again, and again, and again, and again. #neverAgain 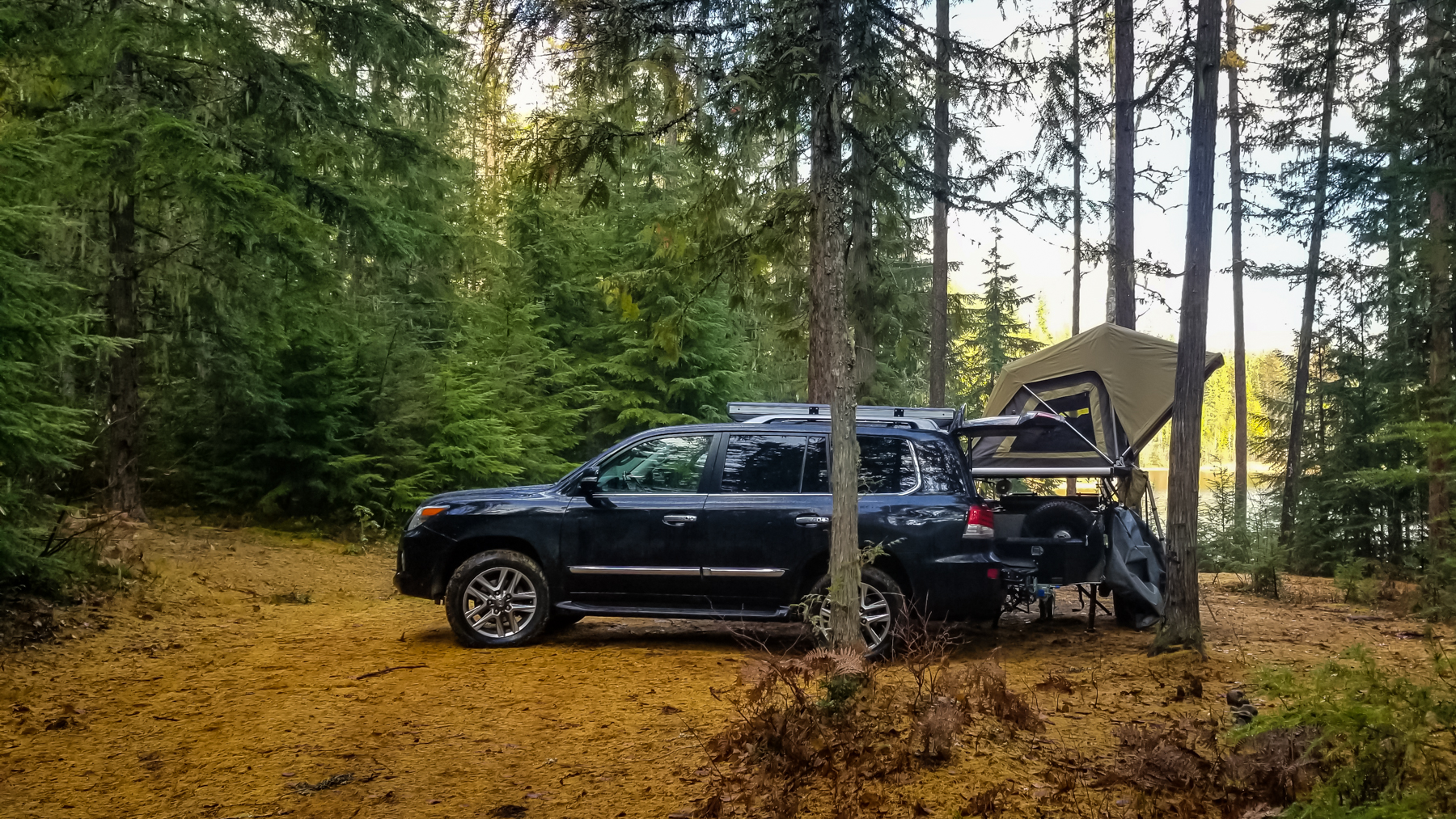 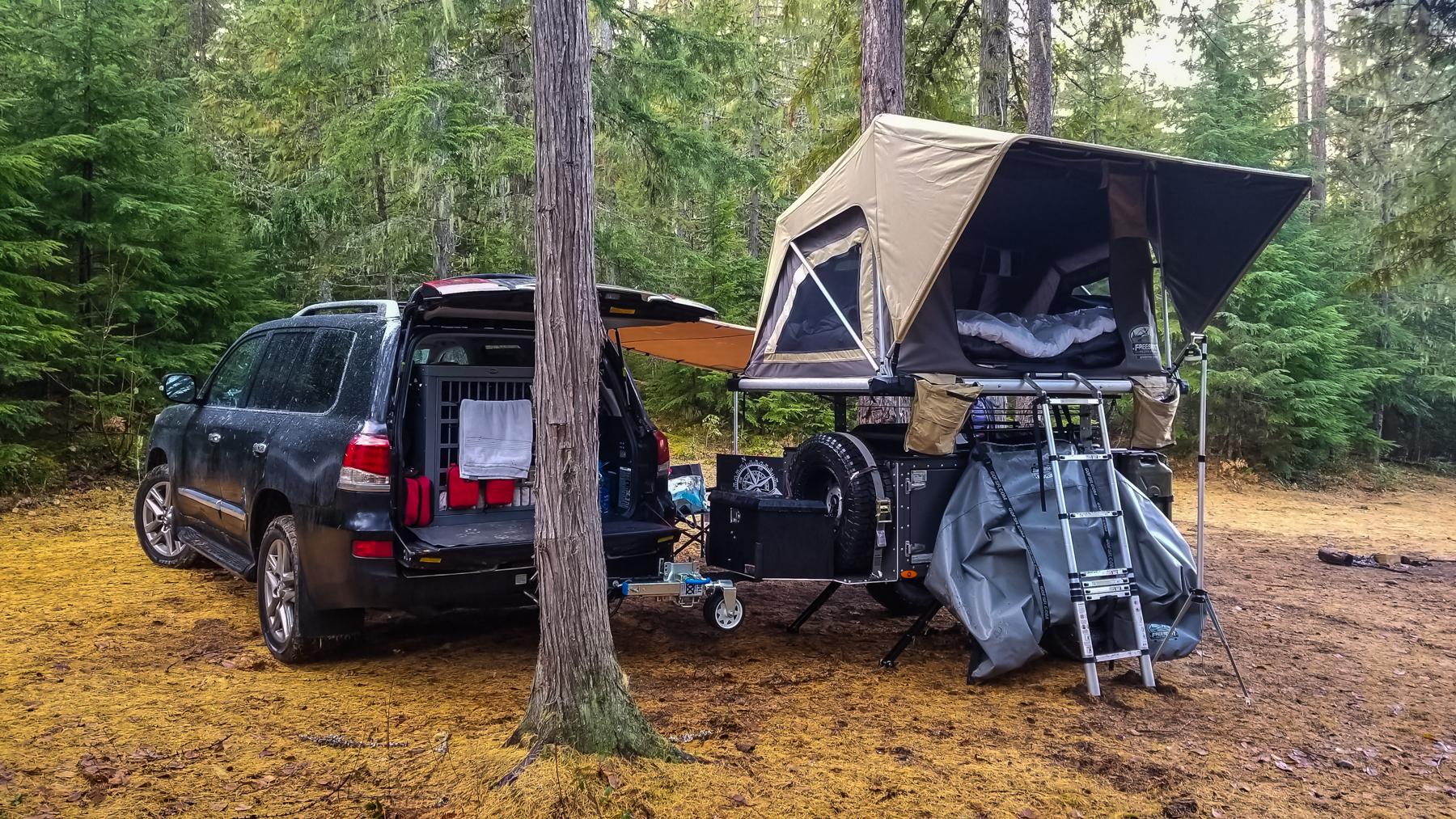 A quiet eventing and a cold, rainy night gave way to a beautiful morning. This would be a great place to go for a swim in the summer! 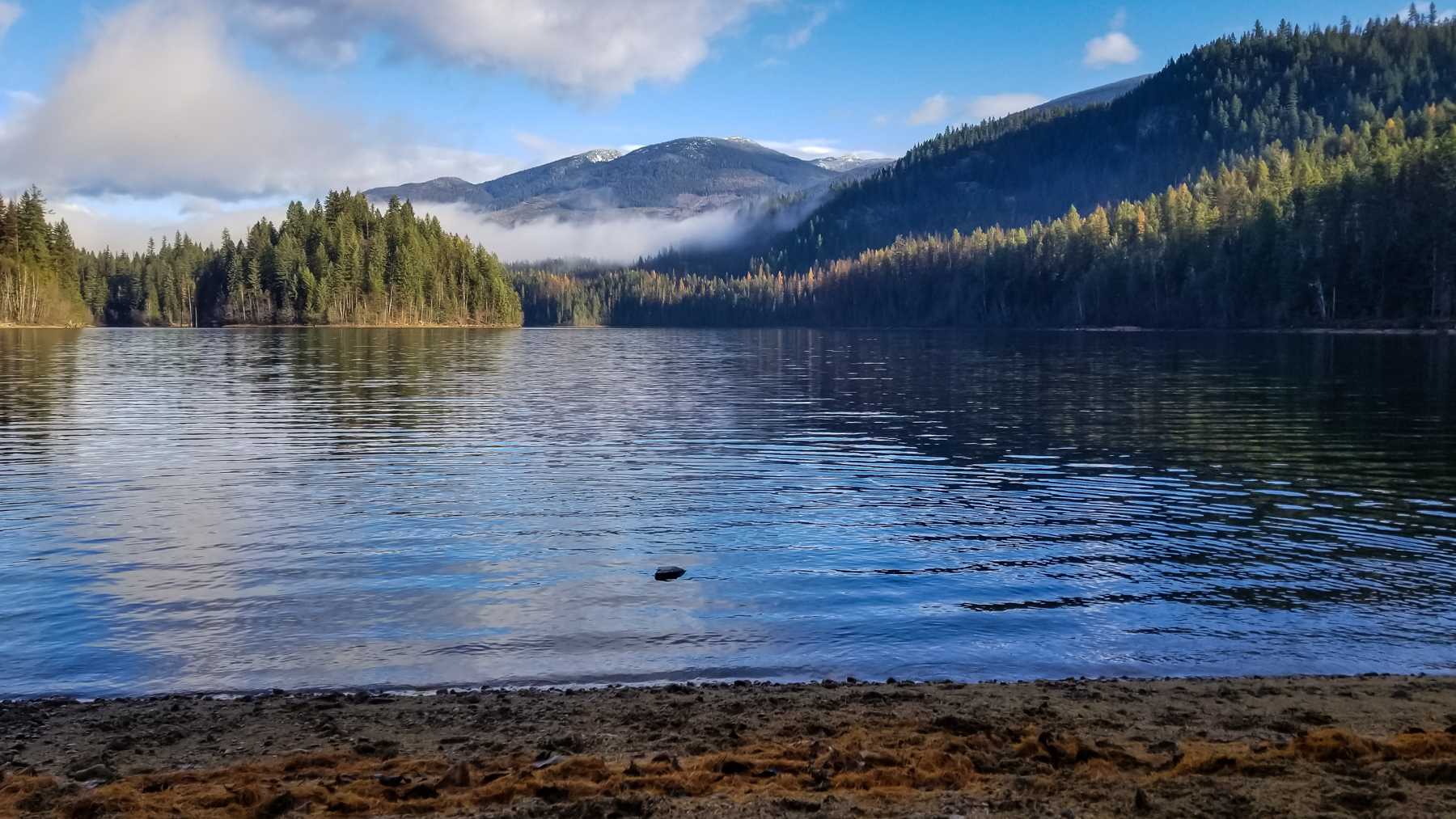 Eventually we broke camp and headed home, with the intention of doing some more exploring on the way.

The map showed a nearby FSR and series of trails leading to a viewpoint, so down the rabbit hole we went!

The FSR quickly turned into a moderate trail, as we gained elevation we found the snow we were looking for. The frozen snow and loose rocks beneath it made for a few tricky moments as we ascended further and further. My near-new Blizzak winter tires worked well (especially given that I was still on street pressures), but there were times I wished for a set of All Terrains.

We got to the final turn-off to the viewpoint: the way in was very tight, with an immediate gate-keeper obstacle and unknown trail conditions beyond it. With snow on the ground, a loaded trailer and no backup vehicle, I opted to pass and keep exploring the main FSR instead.

A half-kilometre further the FSR had led us nowhere interesting, and with no place to turn around, we had no choice but to back up some 250-300 metres. 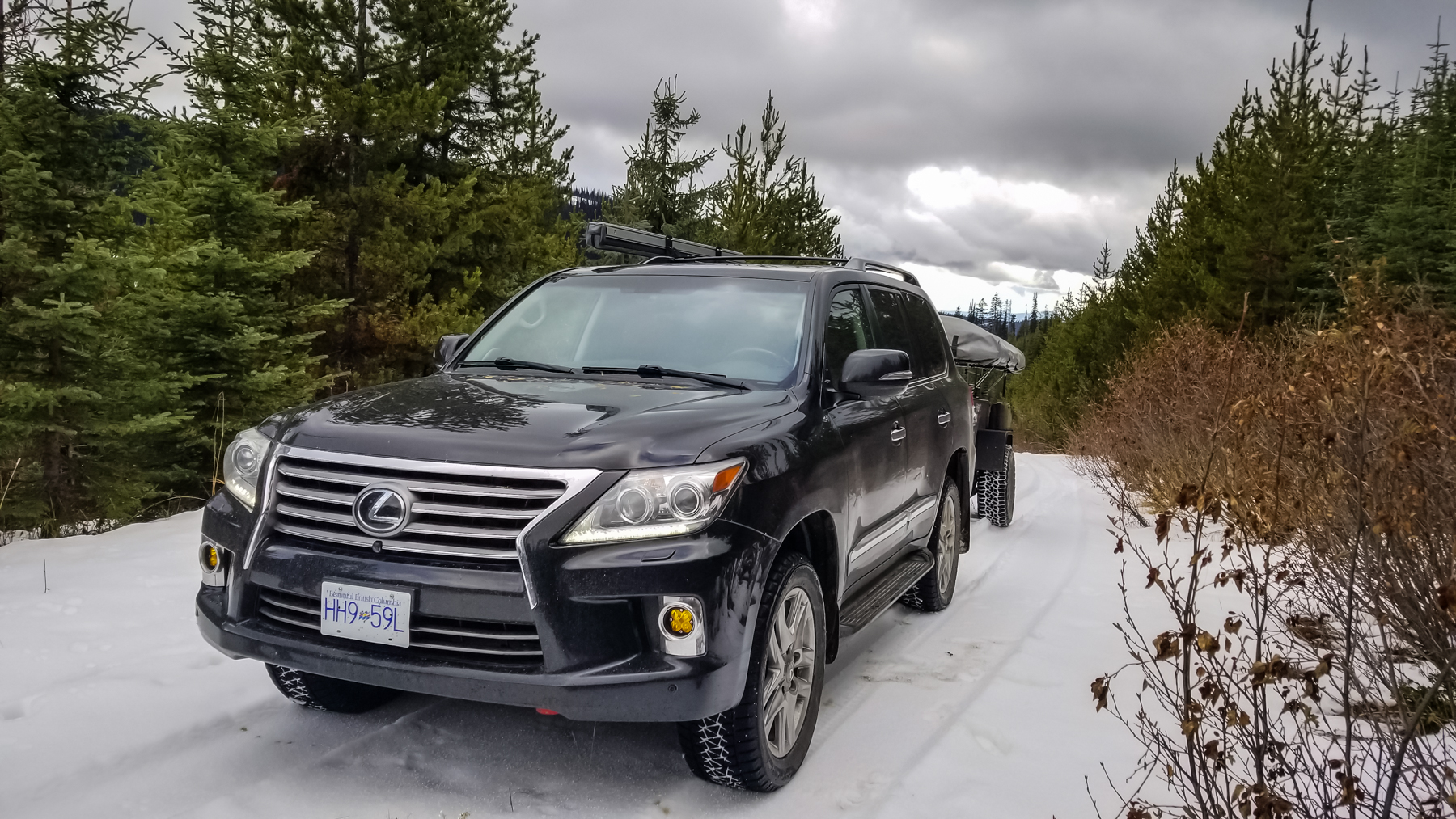 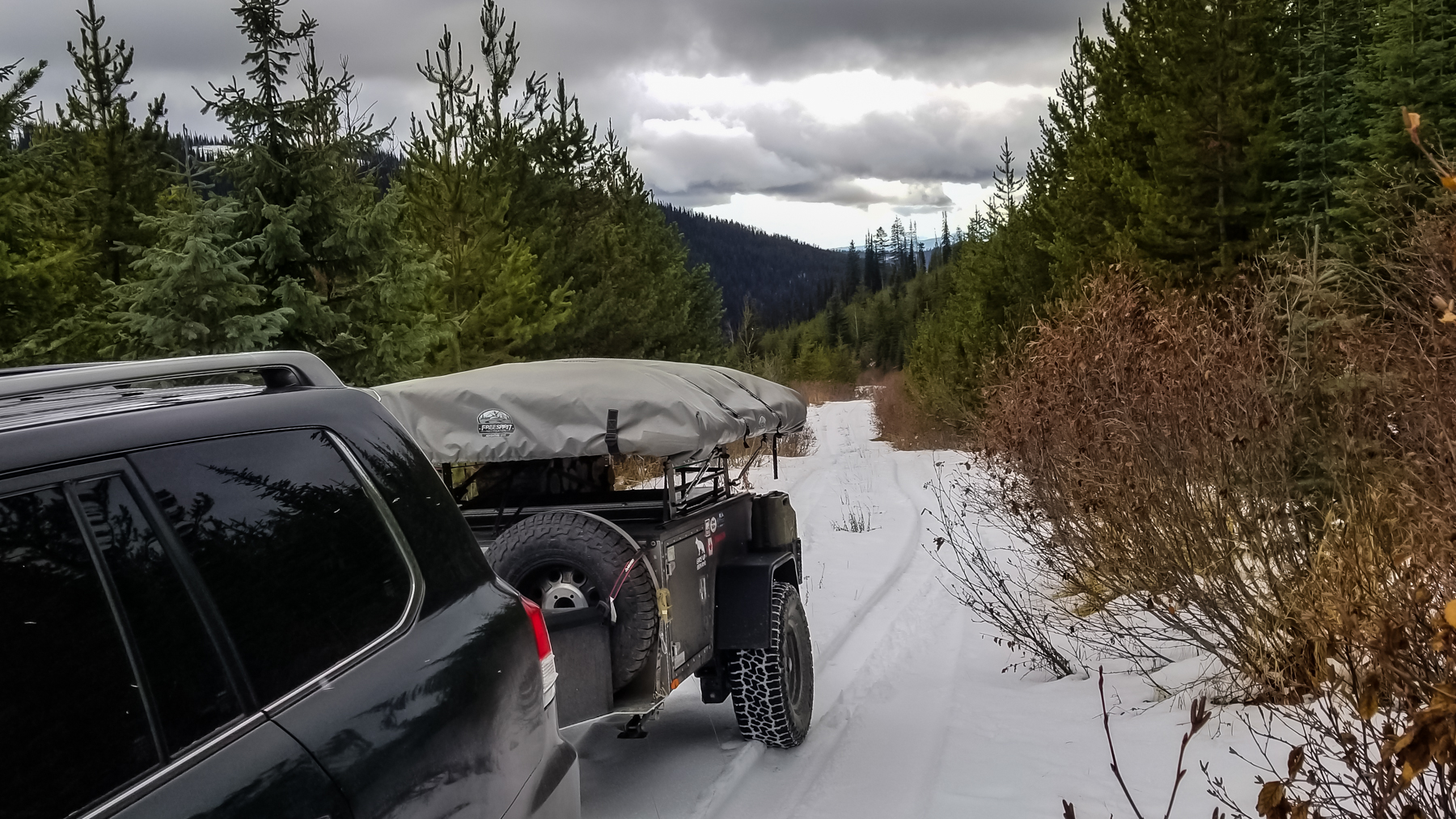 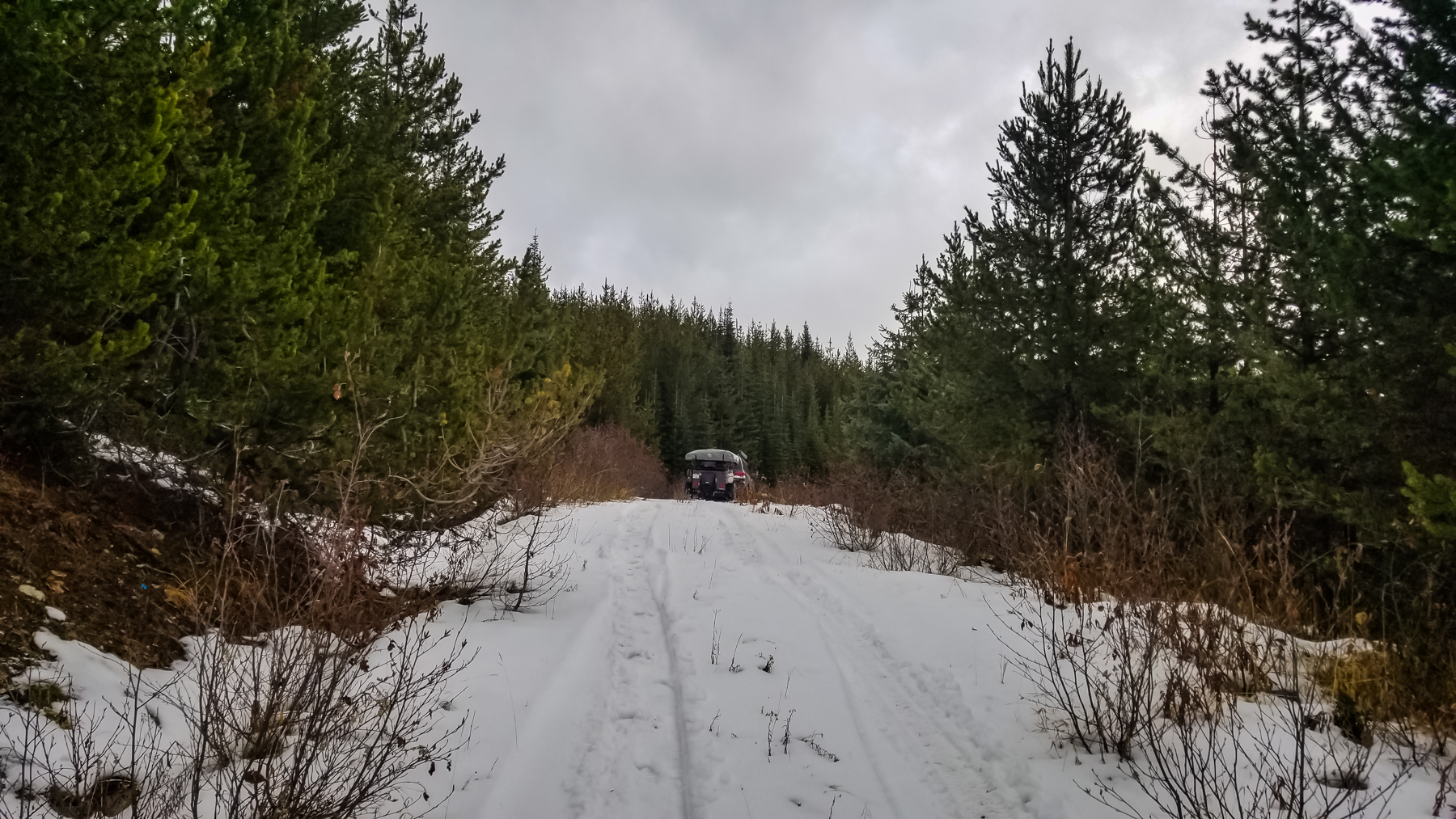 Backing up a small trailer is no fun when you're doing it on a level driveway, but doing it for hundreds of metres down a somewhat steep, snow-covered trail with occasional drop-off on one side made for a nerve-wrecking experience (plus addition of a million new pin-stripes on the LX). 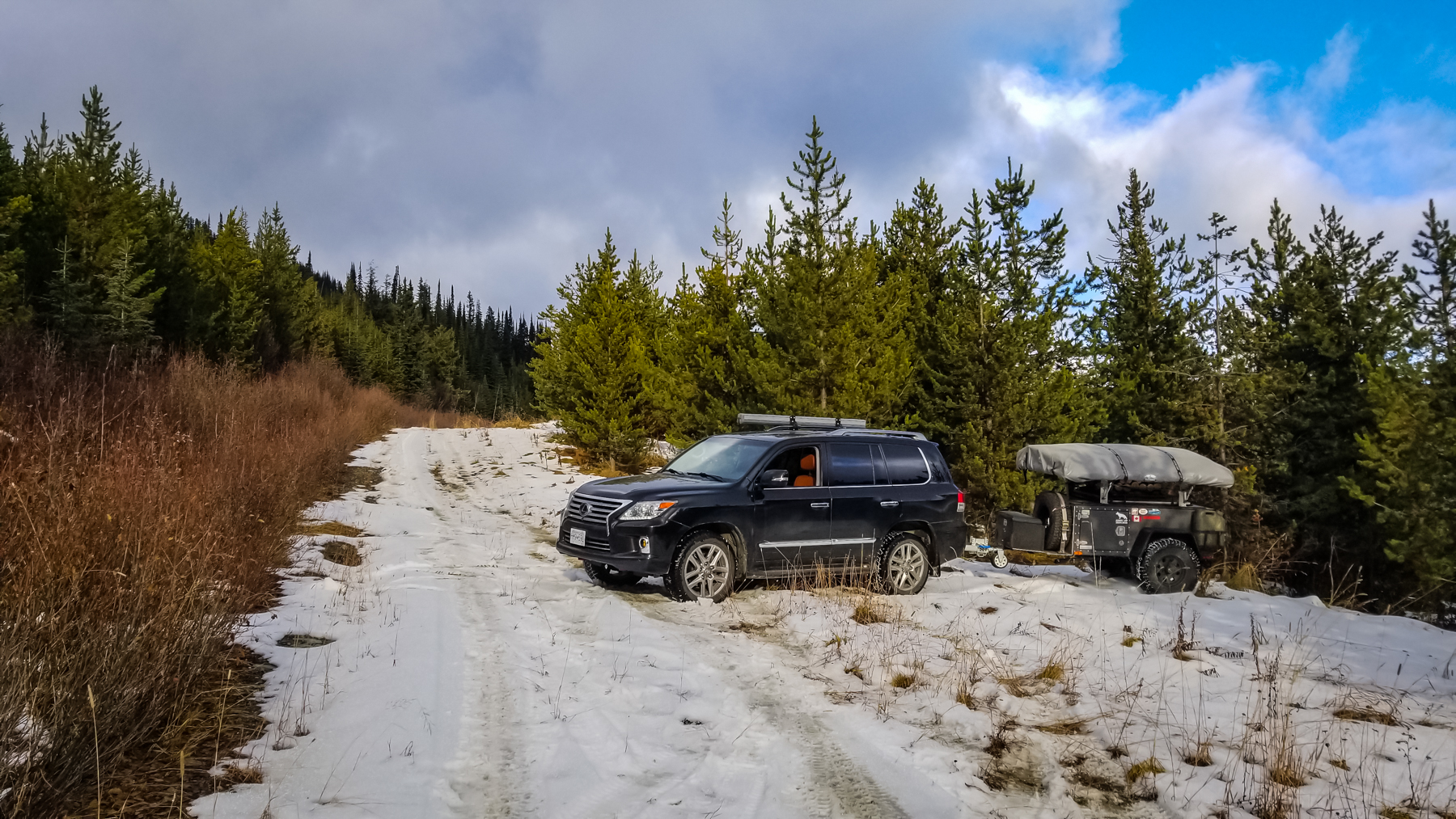 At last, we got to a clearing in which I could turn around.

Facing the right way made descending the rest of the trail very easy, and we soon found autumn again. 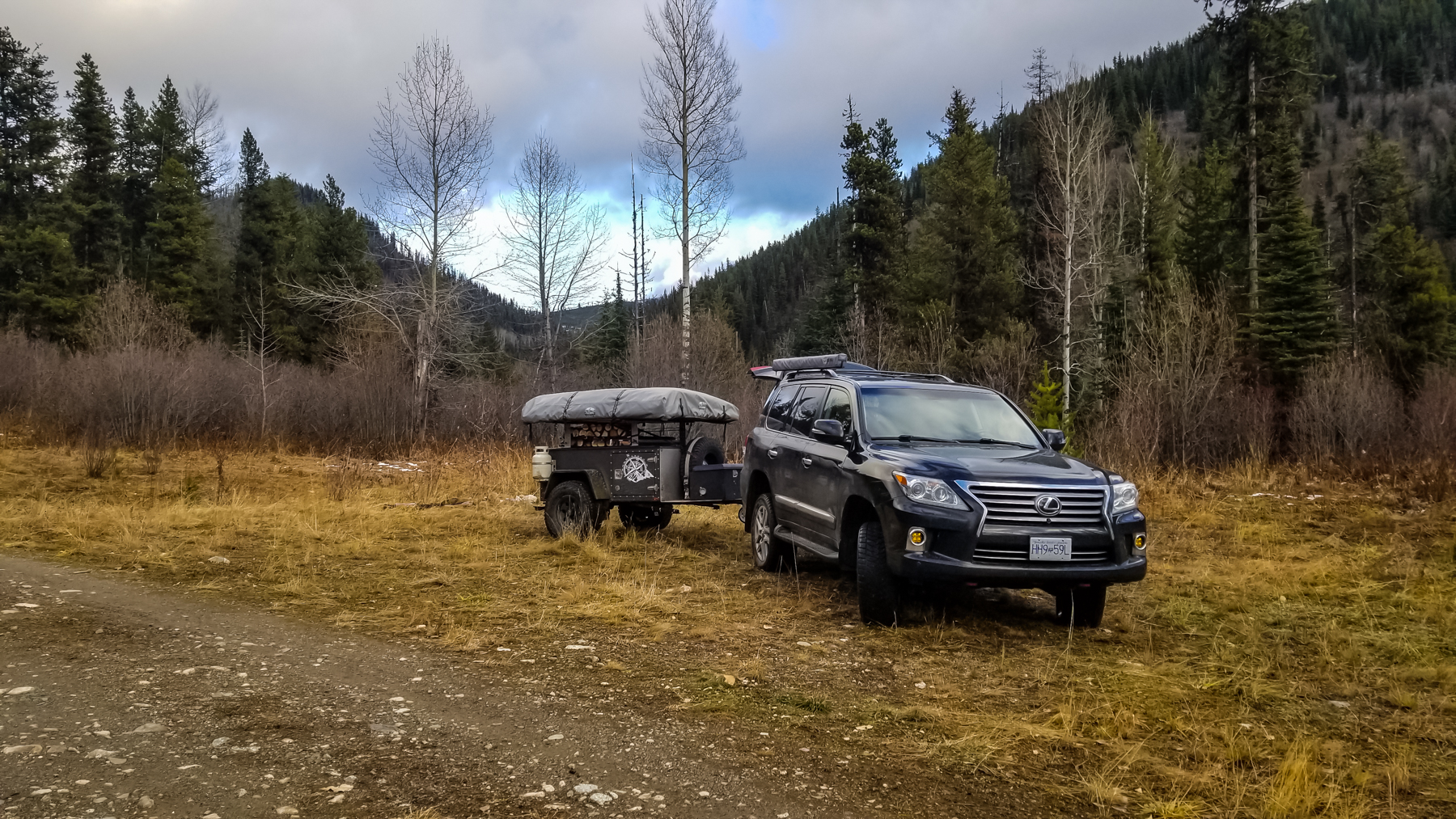 The start of the FSR had numerous side trails, including one that ran underneath the powerlines and parallel to the highway leading home. Pavement is boring, so we opted to take the trail and see where it went. 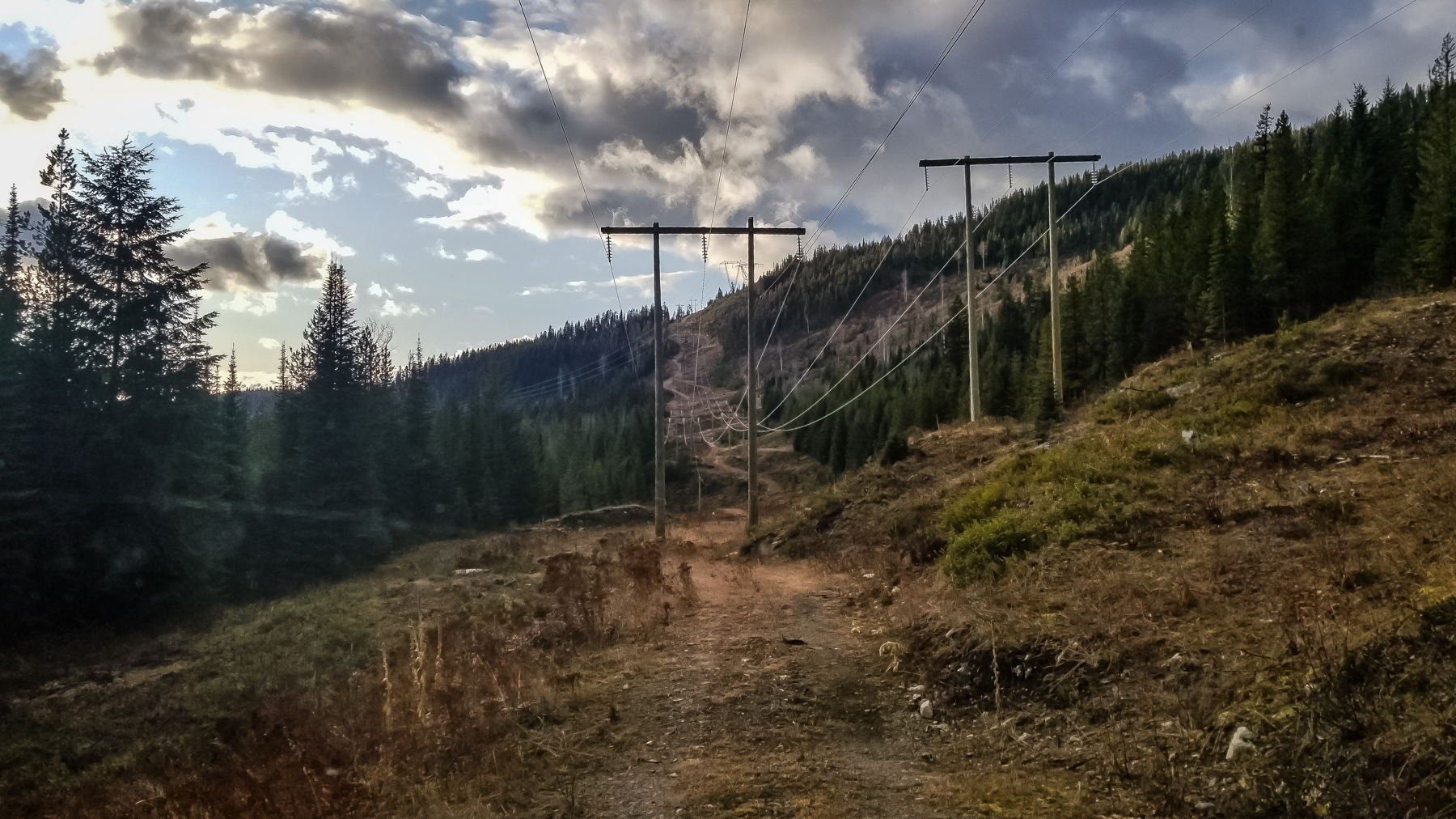 Some fifteen-twenty minutes later we came to the above climb, and got to a viewpoint of sorts. 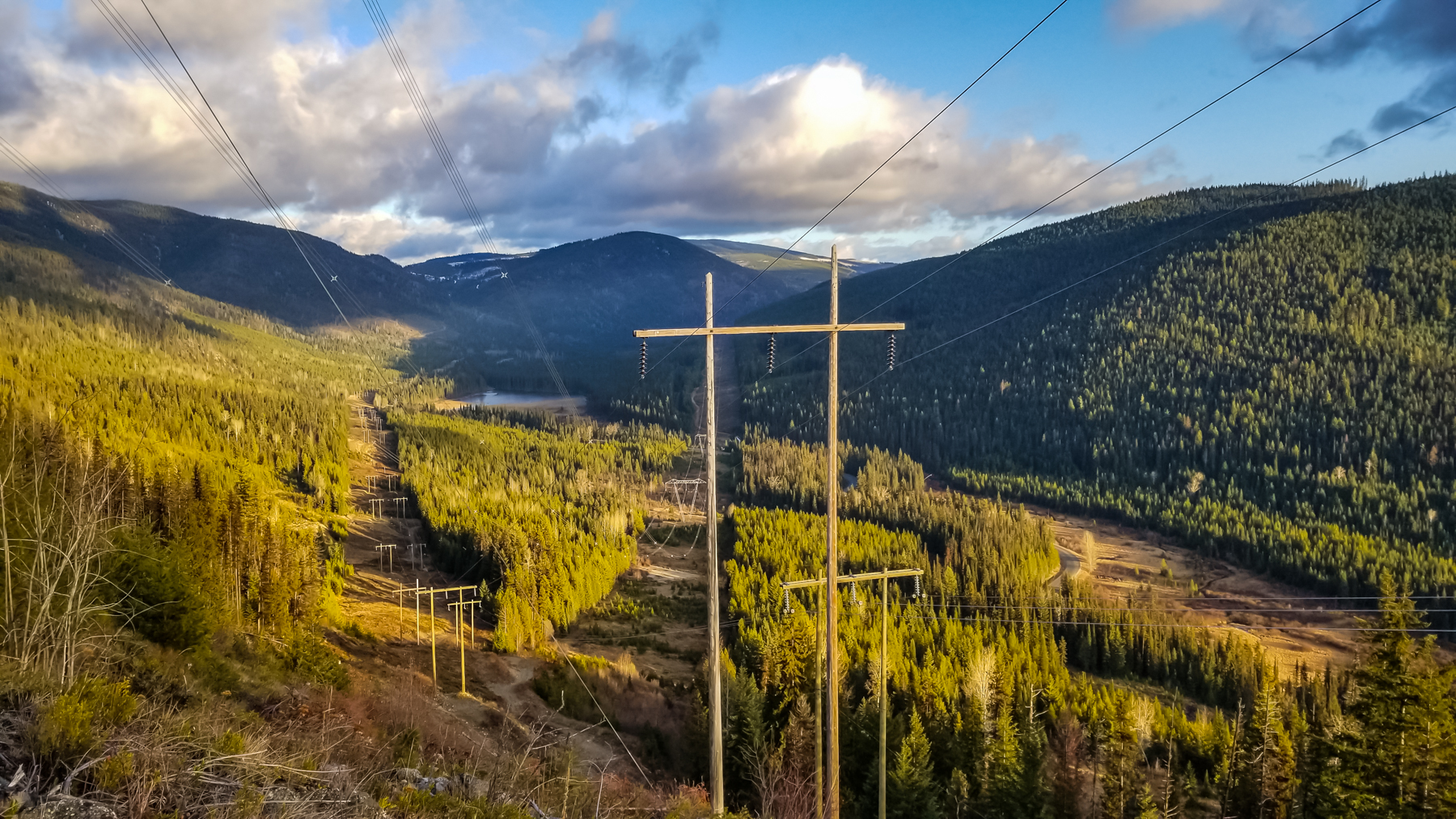 The setting sun and tall grass made for some nice photos! 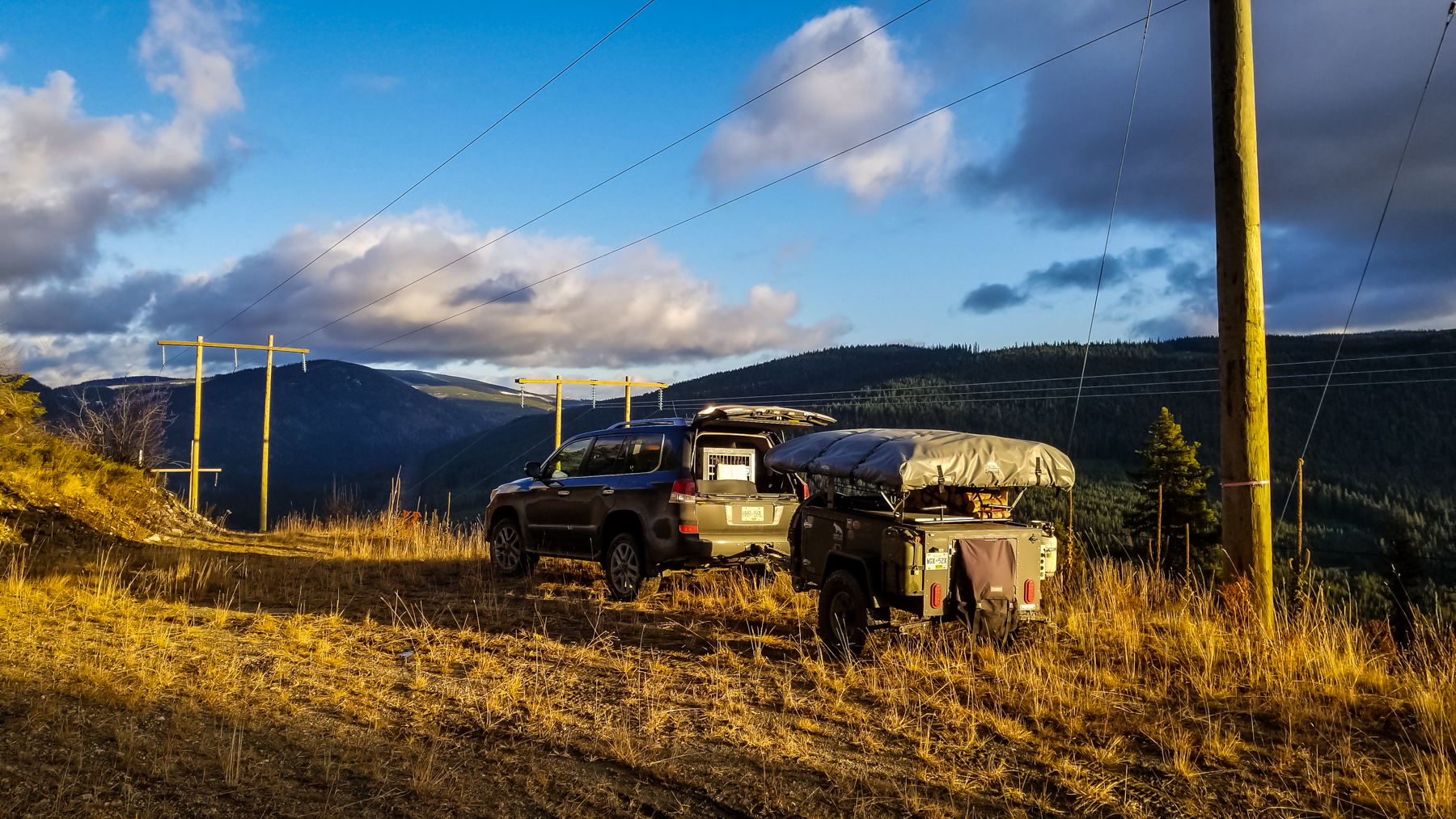 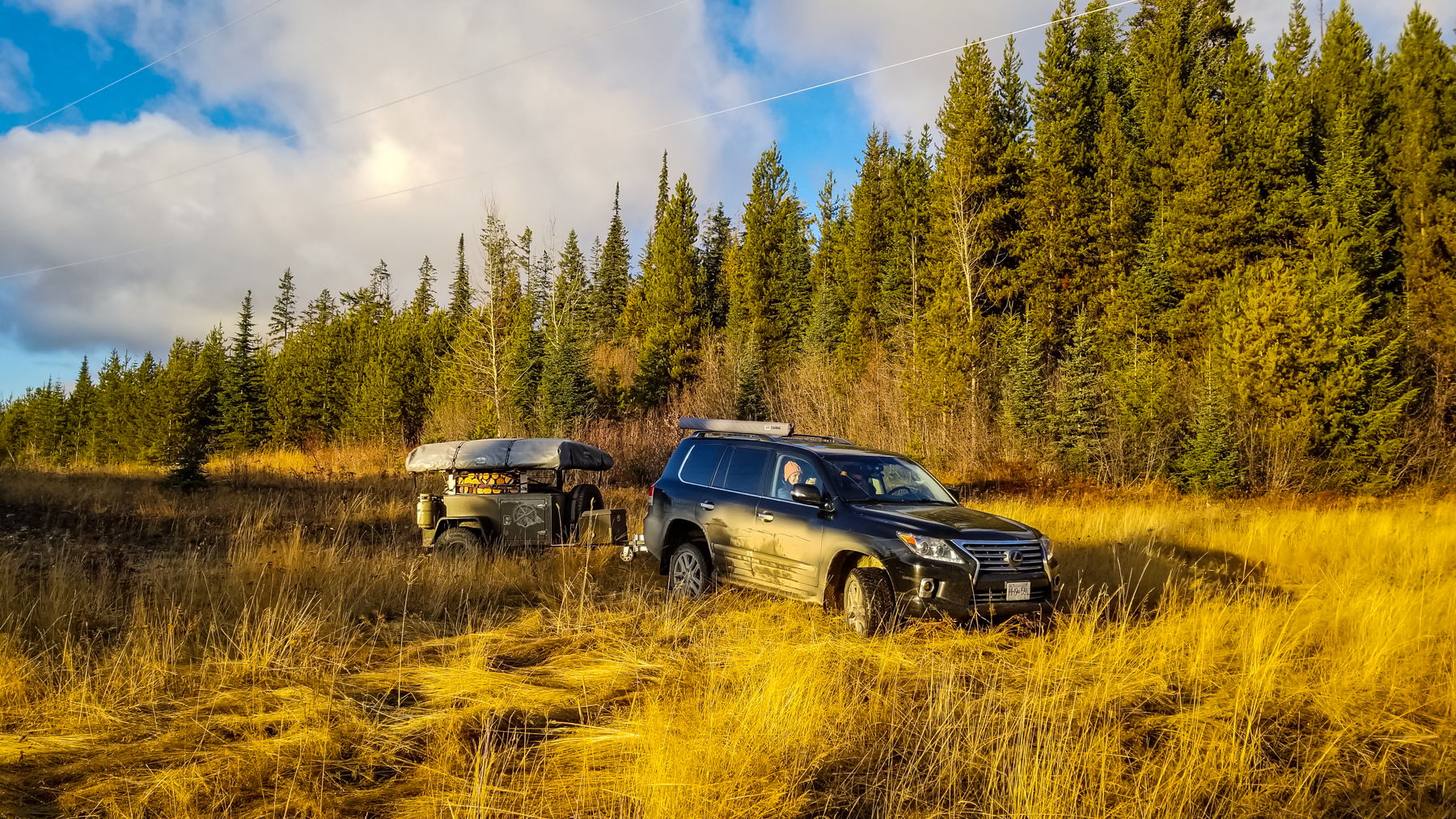 Back home (at the car wash), dirt served as proof that fun was had. 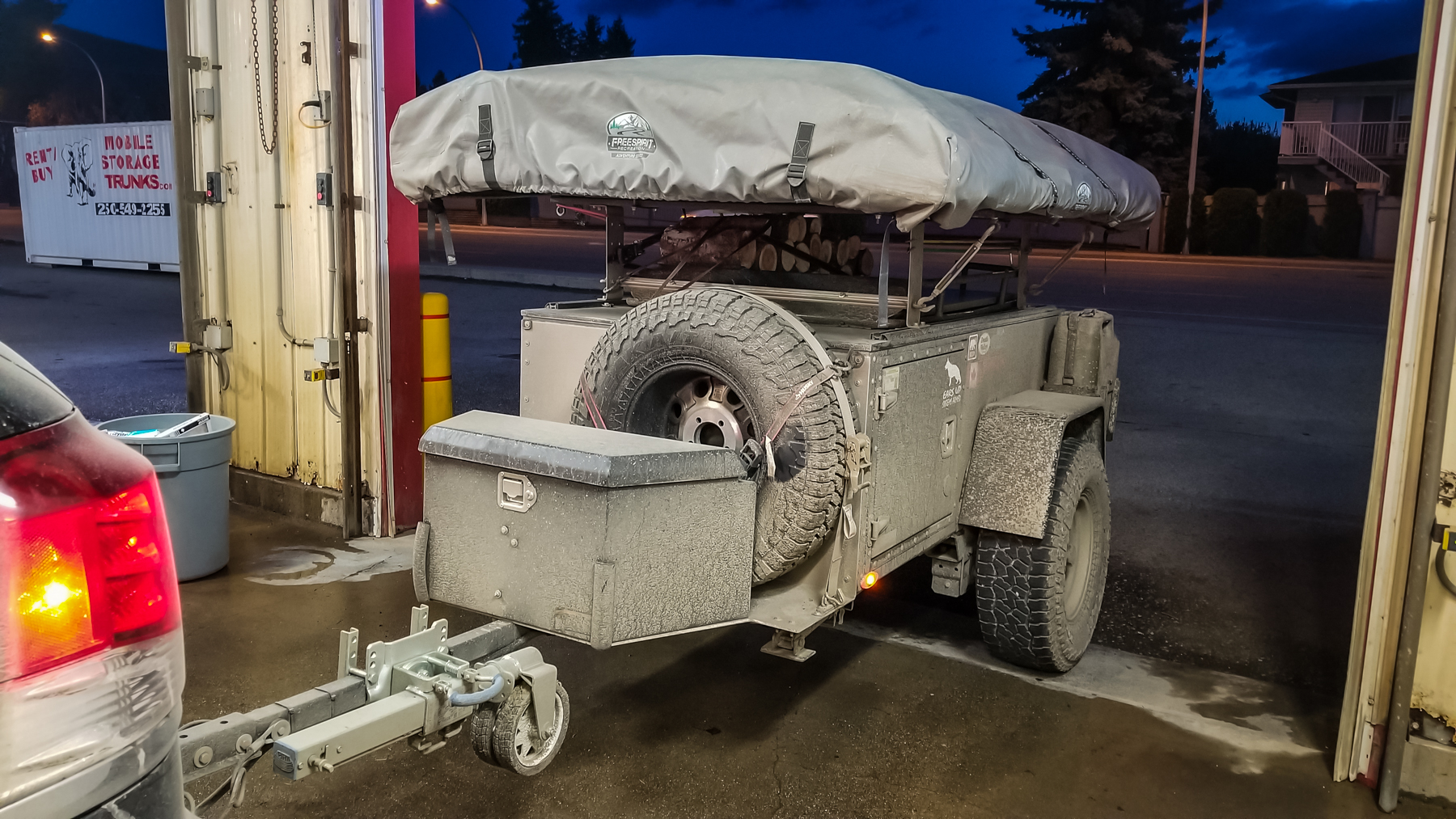