Ground tent vs. RTT: a full-circle evolution of lessons learned.

The comparison of ground tents vs. RTTs seems to be a weekly topic on most Overlanding communities. Having tried both, here's my take on it.

I grew up with cheap, $40-Walmart-Special tents, air beds and sleeping bags. My family didn't know about anything else, so this worked just fine. It wasn't fancy, wasn't convenient, but was enough to instill a sense of adventure and love of the outdoors into me.

My early adult years were spent around an addiction to super-sport motorcycles, (and eventually dual sports) which meant that I had to have a light, fairly compact tent that I could strap to the bike. I bought (and still own) a Sierra Designs Zolo 2, two-man backpacking tent. It went everywhere with me on the bike, I backpacked with it, and I naturally used it while just starting out with off-road exploration and camping.

The tent was small, but it fit me and my German Shepherd dog, and was fairly quick to setup - just a few minutes. 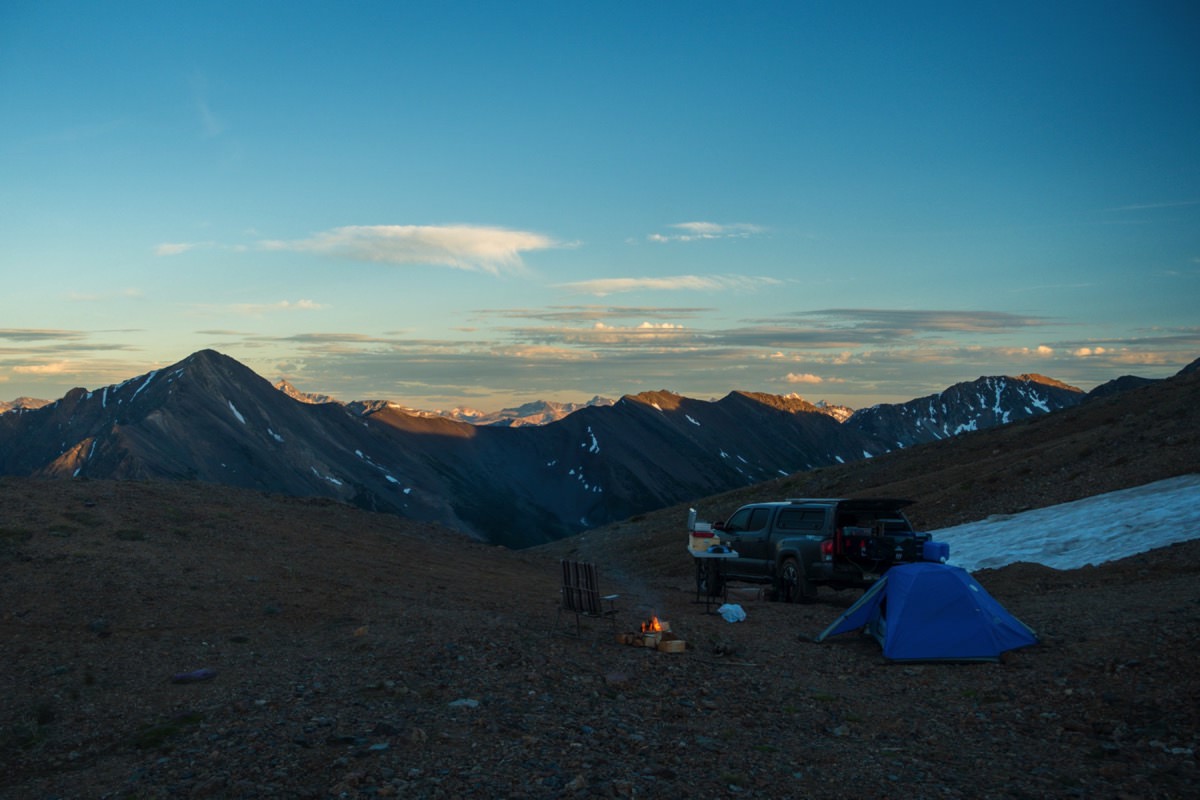 With time I came to dislike the cramped quarters, the thin backpacking mattresses, inability to stand up, and most importantly, crawling around. I was unable to fit a RTT in my underground garage, so after much research, I did the next best thing and bought an OZ Tent RV4, along with a cot to sleep on. I also picked up the OZ Tent ground tarp and side walls, and then went on a two-week trip to Death Valley.

The OZ Tent was awesome. Highest quality tent I've ever seen. Once set up on the ground and properly staked out, it was a heck of a campsite. 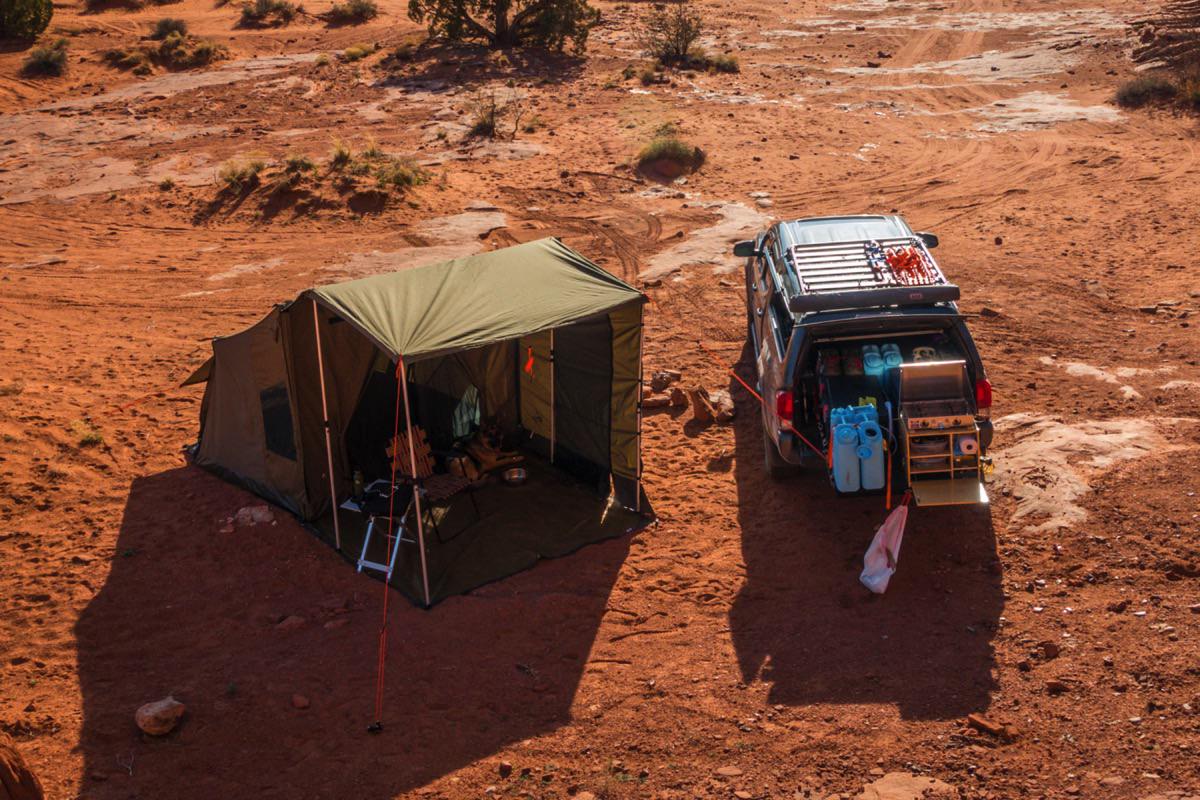 But I knew that the tent & my canopy had to go (to make a RTT feasible) by the second night of using the OZ Tent. Setting up the tent really does take 30 seconds, once it's out of the bag and on the ground...

Before that happens, you need to remove whatever "lock" you used to secure the tent bag on the roof, remove straps you used to attach it to your roof rack, haul the 50lb bag to the ground, remove the footprint/tarp and set it up (ensuring it's not getting blown away by wind), remove the tent from the bag and line it up correctly on the tarp, undo the strap holding the tent together in a roll, unfold the tent, step inside and raise it up, lock the support arms, then wrap a piece of velcro around each arm to prevent it from accidentally collapsing. Then you come outside and stake out the corners. Only then can you start on your bedding. By the time you're done with your bedding, you're at least 10 minutes into the whole process.

To me, doing this day after day is frustrating. And let's not forget that putting things away always takes longer. Especially when everything is wet and covered in sand. My breaking point was on that second night, setting up the tent on the Oregon Dunes, in pitch darkness, with crazy winds, worse rain, and 5C temperatures. The stakes wouldn't hold in the loose sand, wind was blowing things around, camp setup took an hour, and I was soaked to the bone and freezing. That's exactly when I knew I had to have a RTT with bedding stored inside it, so I could park the truck and be sleeping in under 5 minutes regardless of weather conditions.

And so I sold the OZ Tent and purchased a brand new James Baroud Explorer Evolution. I got rid of my canopy, bought a retractable tonneau cover, and had a rack built to accommodate the RTT over the tonneau. 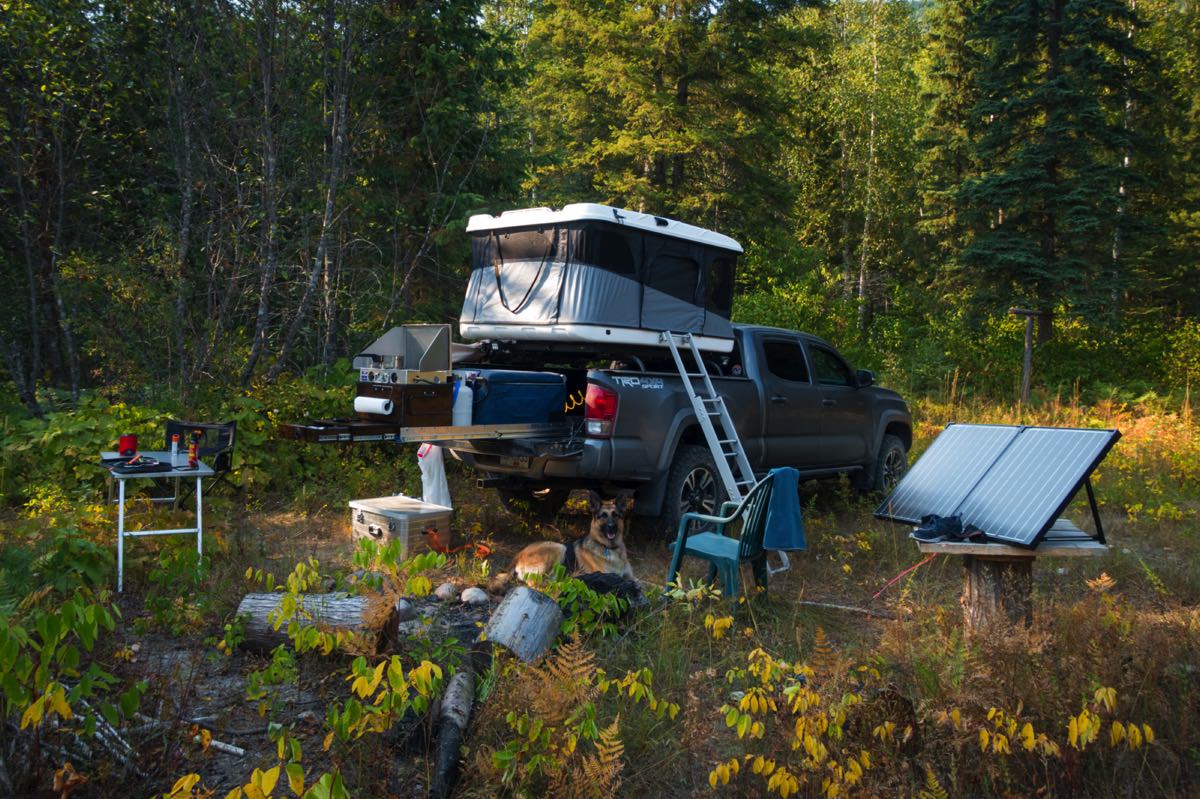 I spent about a dozen nights in the hard shell and had no regrets. A covered entry would be nice, but it was not a deal breaker, and I had ideas about how to make that happen in the future.

It's a problem I didn't know I had, but looking back to using ground tents, I was always worried about finding a good-enough site to pitch the tent: level, nice ground, no sharp rocks to cut the tent or mud to get it dirty, good-enough ground to hold stakes, close to the truck, etc. I spent a good chunk of each day with that worry in the back of my mind. The ease of being able to stop literally anywhere and sleep just about instantly is a huge psychological relief.

I also addressed the lack of covered entry with a 16 ft Kelty Noah's Tarp. 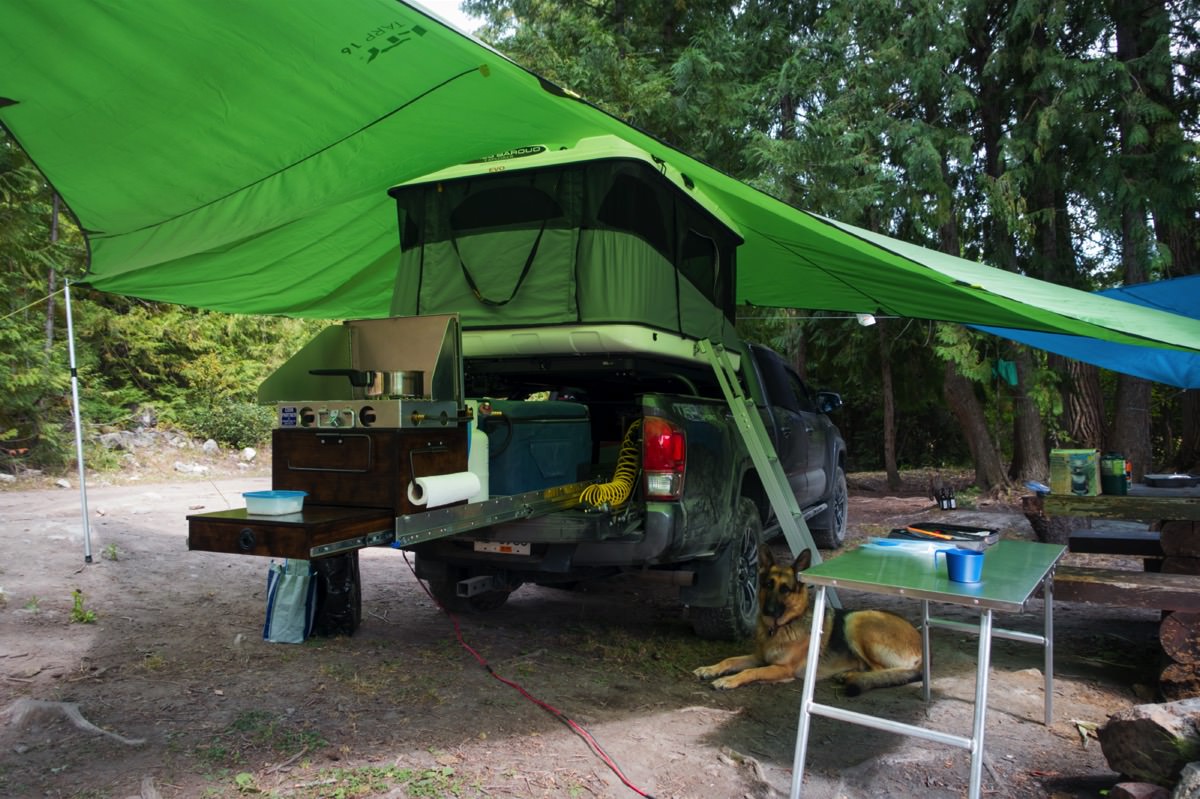 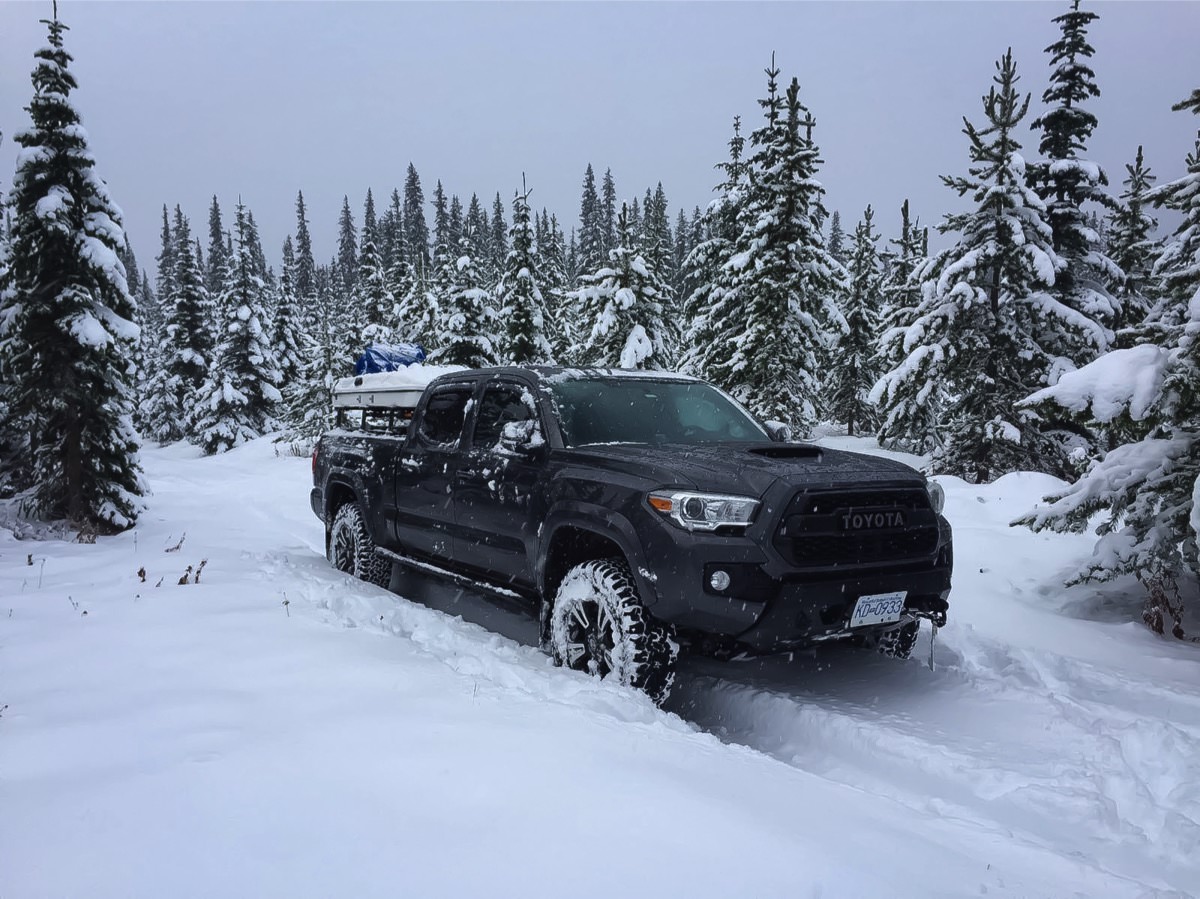 But it was not always possible to setup the tarp as nicely as I had done it in the summer, especially when doing so with snow and wind coming down. 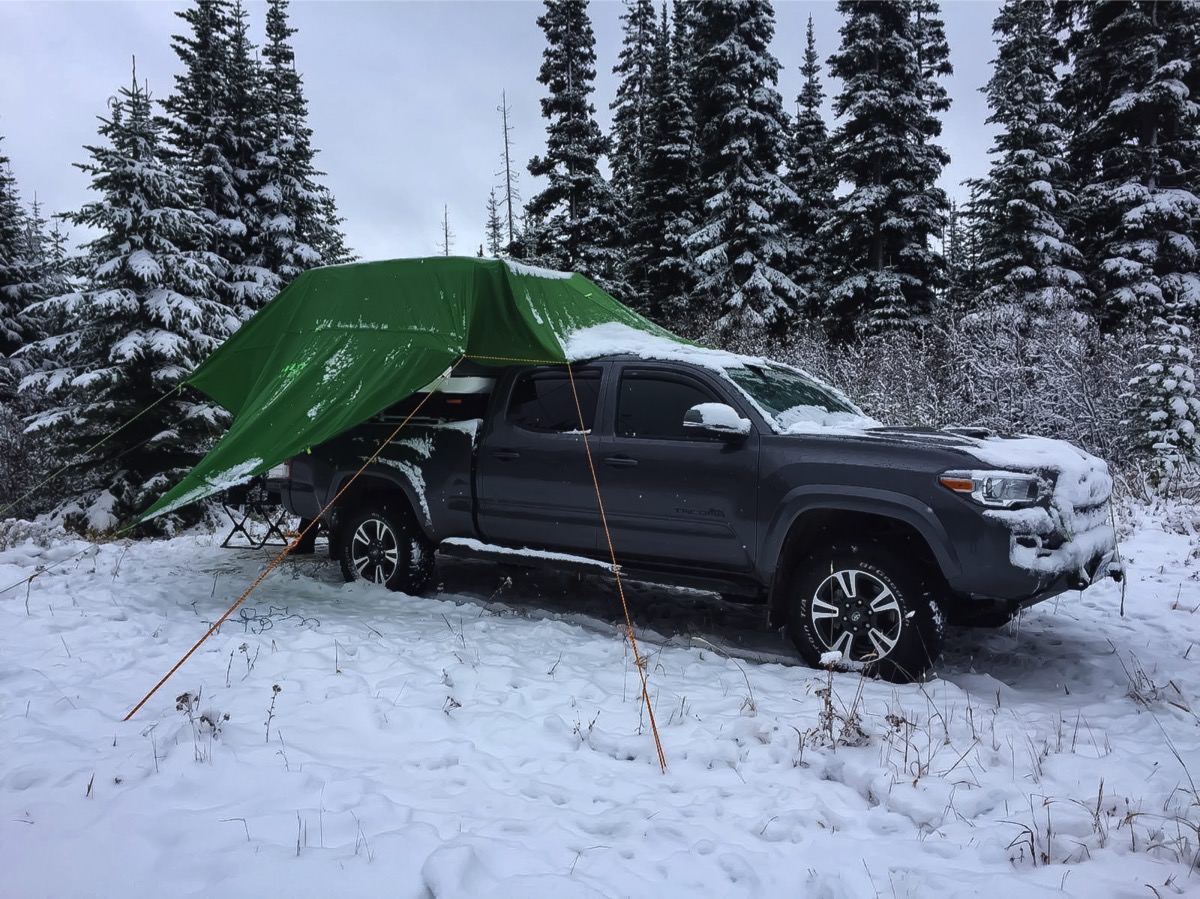 It was -5C that night. We found it miserable to have to get un/dressed outside the tent, half-hanging on the ladder while wet snow blew around and under the tarp, right on you. There was no reasonable way to warm up the tent. Midnight pee runs were a huge inconvenience, and despite best intentions, snow was dragged into the bedding on numerous occasions.

Nonetheless, it was superb to be able to pop four latches and have your sleeping arrangements be done. With mattresses, comforters and pillows in the tent there was virtually no setup involved, and the convenience of that cannot be understated.

We then camped in -10C, and found that without precipitation coming down on us, and with 100% down comforters, we were rather comfy. Even so, climbing the ladder without shoes (can't take them inside the tent) was not pleasant. 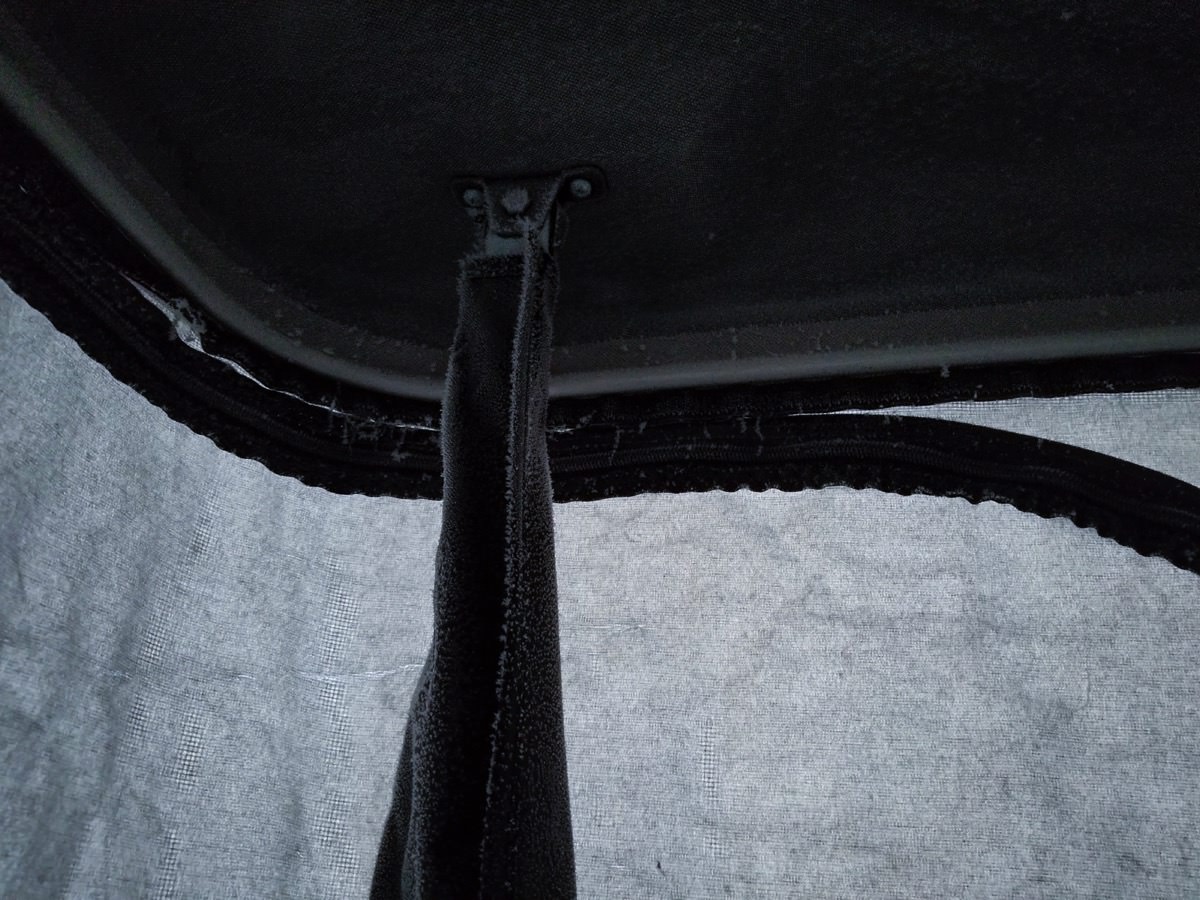 The lowest temperature we had seen this winter (while camping) was -24C, when the photo above was taken. We woke up to frost and icicles inside the tent, and parts of comforters semi-frozen (from the moisture in our breath). The heated 12v blankets we had were of little to no help.

Life got in the way of trips over the next few months, but I did discover some issues with the tent, which resulted in a replacement tent (and selling the replacement).

With the opportunity (necessity, really) to come up with new sleeping arrangements, I got down to research yet again, and guess where I ended up? Another OZ Tent RV4, which came on the second Death Valley trip with us a month ago. 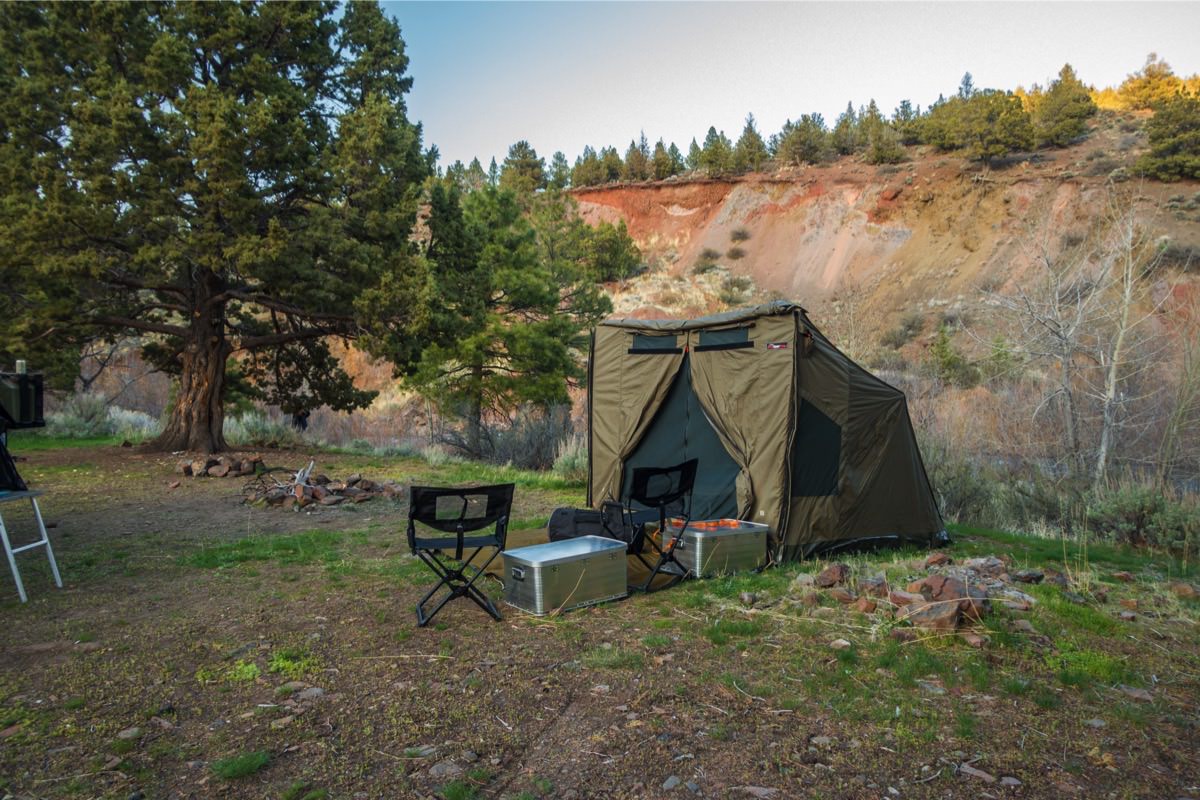 With the type of camping we do, having the opportunity to stretch out, to stand up, to fit not only the two of us, but also the dog and a proper heater, became very important. Without that, we would be limited to fair-weather camping, which would cut our camping season in half, if not more. With the RTT, our group of four campers was huddled around a campfire, while still cold and somewhat uncomfortable.

With the OZ Tent, I can setup the side and front walls, and put a propane heater in the corner, which will provide comfortable room and warmth for four adults and a dog without breaking a sweat. We'll be able to remove some of the layers worn and actually relax. Same goes for rain and other foul weather conditions. And the same room can act as a nice bug shelter when the flying insects become problematic.

I also realized that staying put for longer than one night was so much more enjoyable than changing locations every night. We are not making a YouTube series to please sponsors, we are getting out to enjoy ourselves, to forget about the day to day life. It is important to slow down and relax, to take in what's around you and explore by foot (or just lounge on the beach)! The creature comforts of a good ground tent - especially when combined with the (optional) "front room" of an OZ Tent - heavily outweighed the benefits of the RTT. Similarly, the downsides of having to pack away a lot of wet canvas (in poor weather) are not enough to overcome the downsides of the RTT. And to make things even better, with the AluCab canopy on my Tacoma, I found that it is quite convenient to transport the tent inside, tucked diagonally at the roof, which eliminated further transport-related headache.

There is undoubtably more work to setup camp, but for us, the benefits are worth it. And with a cot and an Exped Megamat Duo LW on top of it, I dare say we sleep much more comfortably than in the RTT. If we were fair-weather campers (or lived in a drier climate) and had the opportunity to easily mount/transport/store a RTT on top of the canopy, I think it would still be a strong contender. But being where we are (PNW) and wanting to camp year-round, the OZ Tent is simply the better option. (Only surpassed by slide-in campers and tear drops, which are a whole different animal.)