Winter camping brings with it the challenges of sub-freezing temperatures. We've previously tent camped without heating in as low as -24C, but this year we decided to make such trips a bit more comfortable by adding a quality, canvas tent (on the way!) and wood stove for heat.

The stove of choice is sold by Backwoods Glamping, out of Alberta, Canada, but is almost certainly made overseas (read: China). That said, outside of a few small details, it seems to be pretty well built.

I chose a fairly large stove with the intention of packing it with a lot of wood, turning down the air flow, and having it burn for a longer period of time than what would be possible with a stove that had a smaller capacity. This particular stove is intended for use in a portable sauna, so it can also put out a lot of heat when you need it. 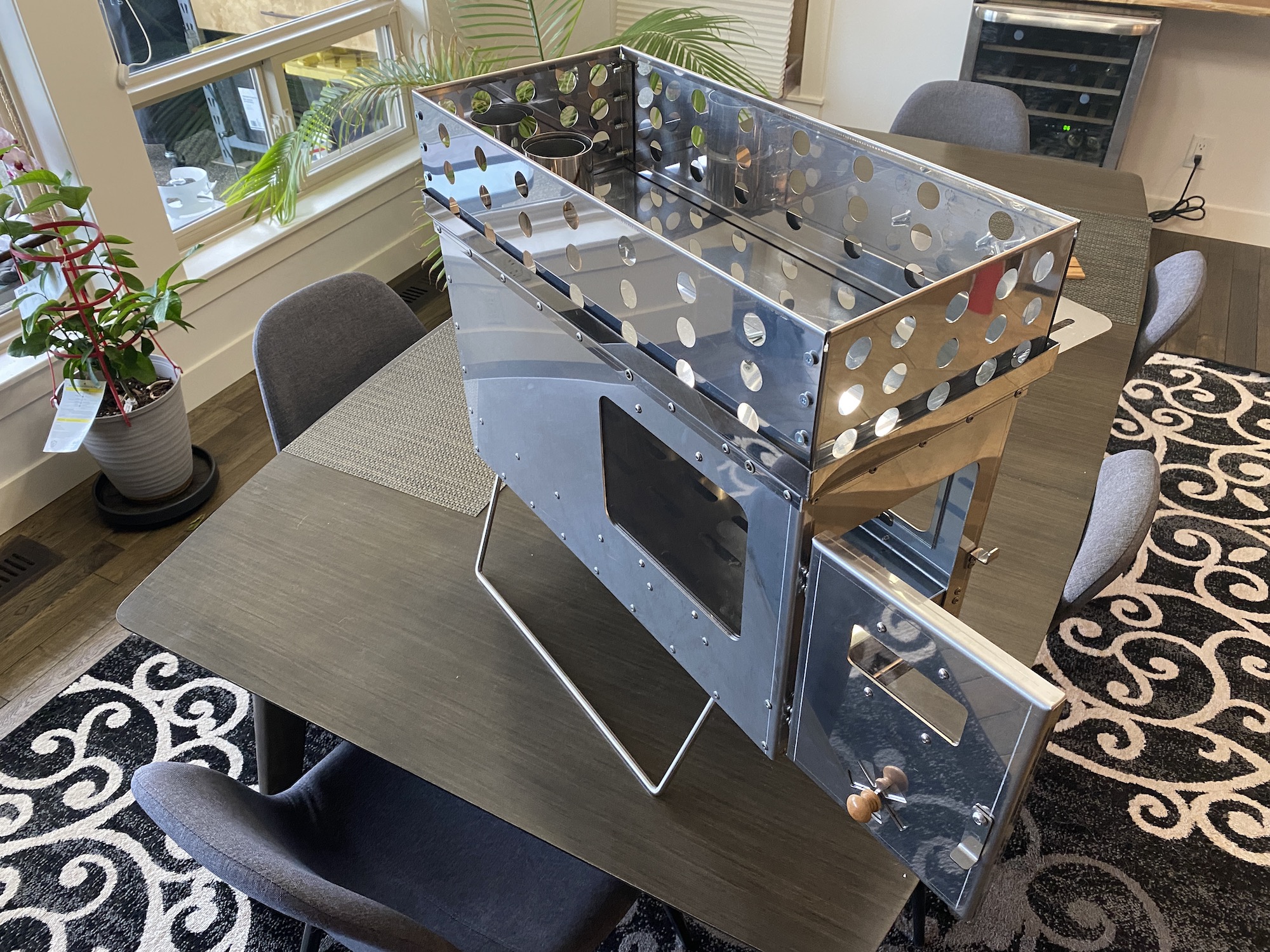 The tray on top is meant for rocks (again, sauna use) and can be removed if not needed. Small tables can be mounted on each side to keep food items warm, and the circular "lid" on top of the stove can be removed to provide a lot of heat to whatever pot or pan you place there.

The stove arrived very well packaged: a solid, reinforced box, along with soft padding for every individual component. The instructions that came with it were quite poor, having whole sentences abruptly ending without completion. Thankfully, instructions are really not needed as everything is self explanatory and can be accomplished in minutes with basic hand tools. I did find a random M4 nut bouncing around in the packaging, despite not having a bolt to go with it. 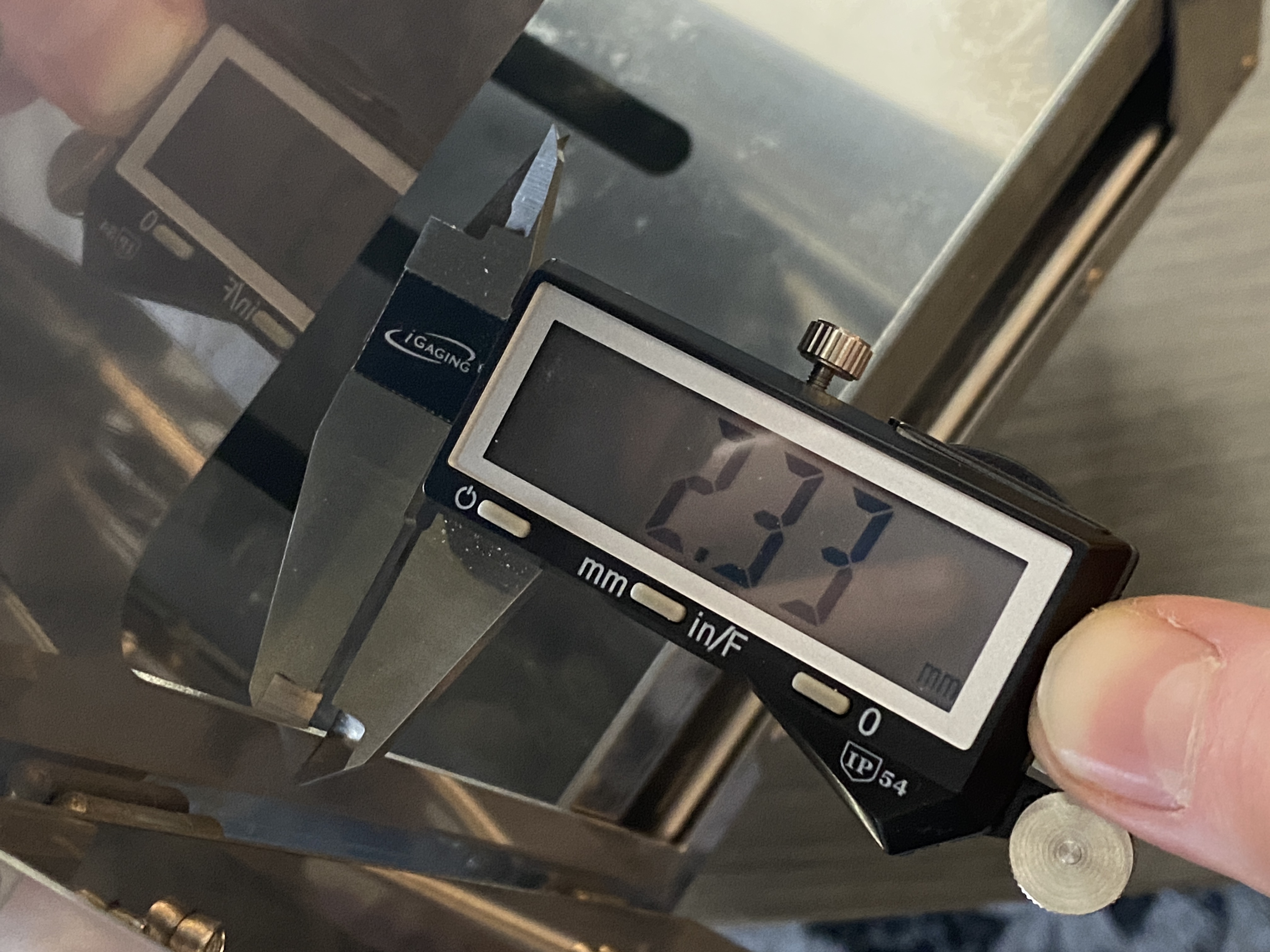 The stove is constructed from decently-thick stainless steel, formed and rivited together. M4 bolts and nuts hold the three small windows in place. I found all of these bolts to be loosely assembled, and re-tightened them. One of the bolts on the front window was completely loose and bouncing around. With some vibration from transport in the car the nut would have come off in no time. 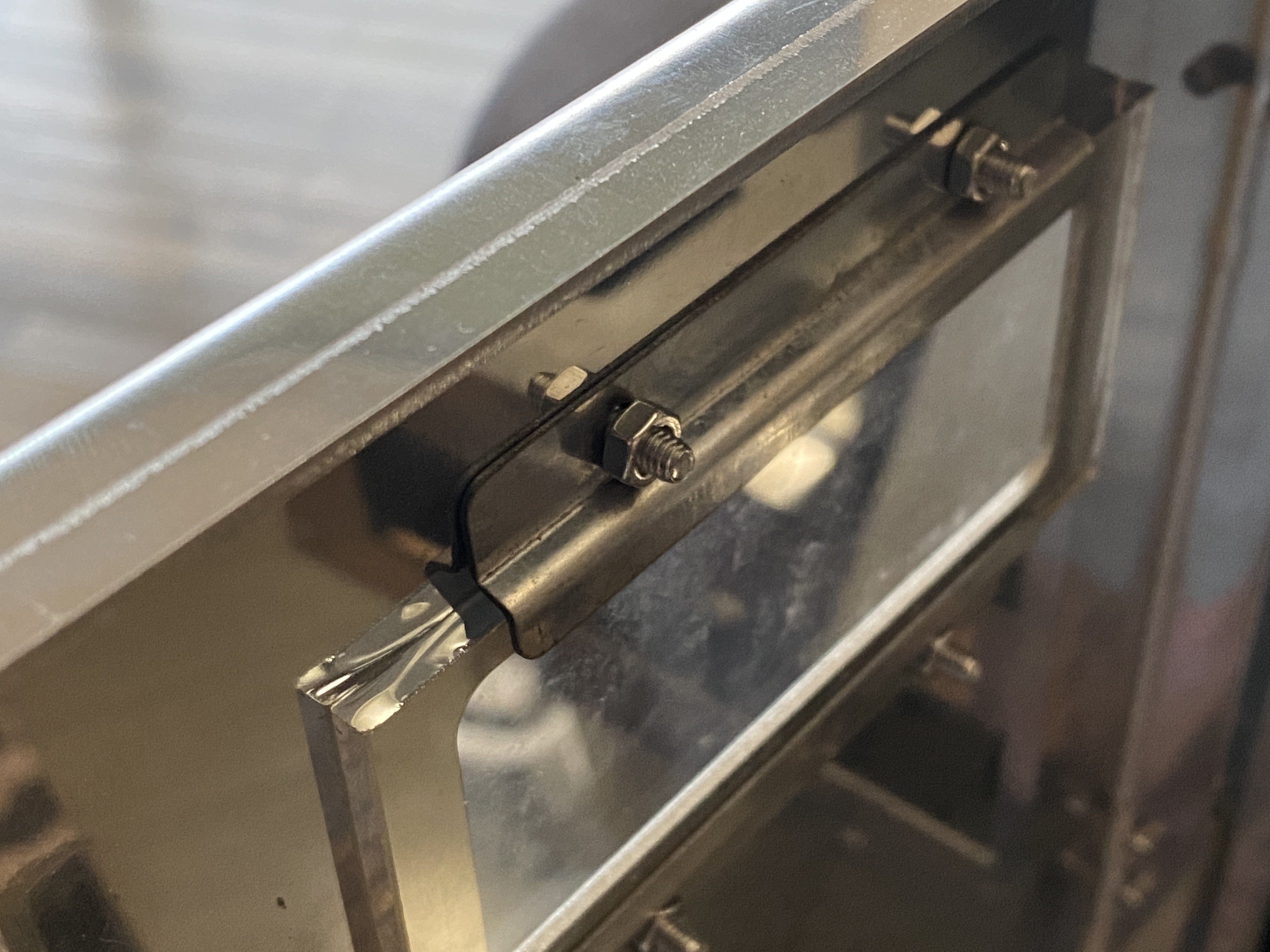 The only assembly hardware required (and provided) was a series of M5 bolts. Unfortunately they don't appear to be stainless steel - a cost-saving measure, no doubt. The bigger problem is that all of them have the countersunk head, and none of the pieces that are being assembled are meant for countersunk bolts. Seems like another cheap-out choice. 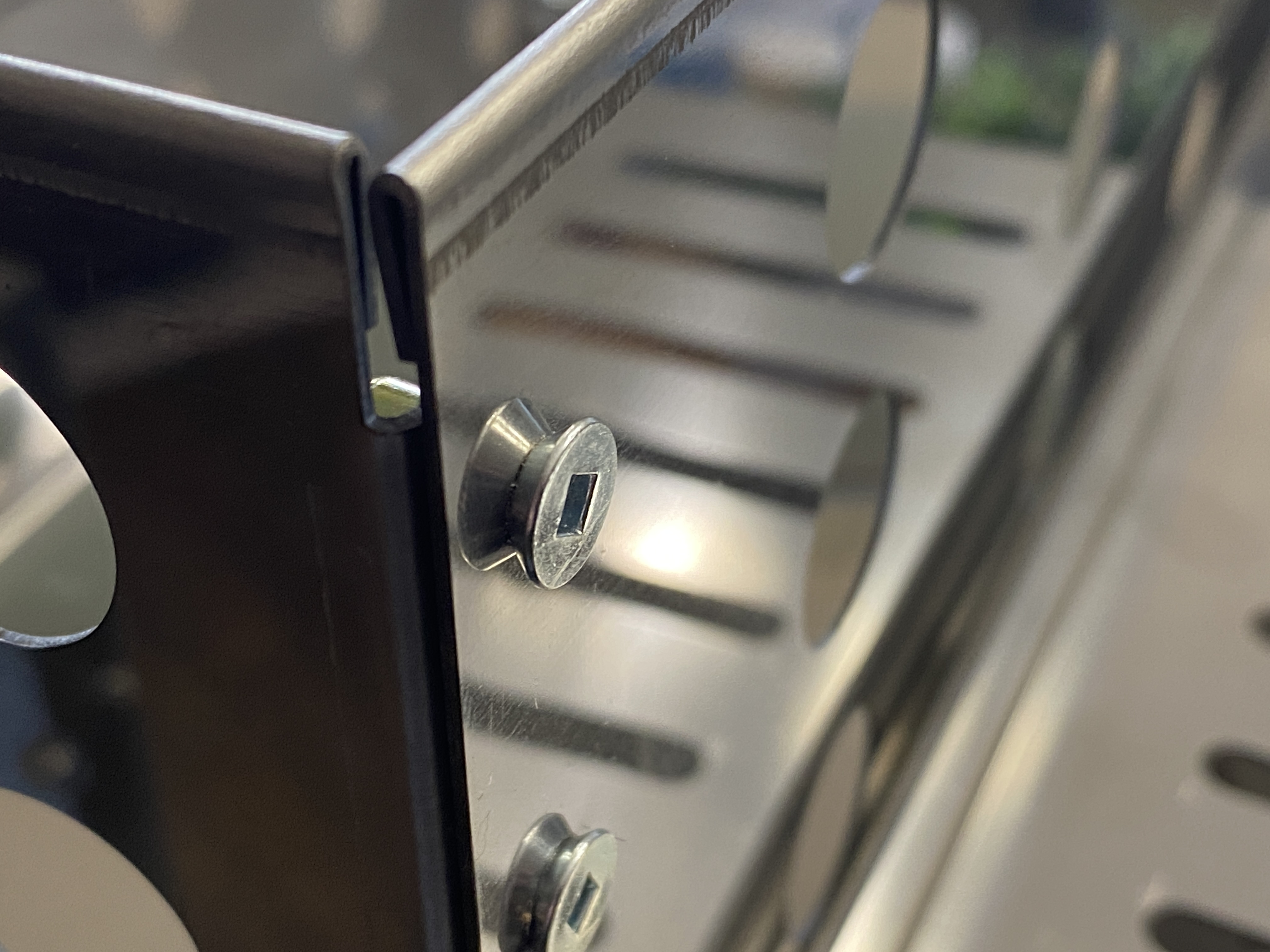 I left the bolts as-is for the rock-assembly (as I don't intend on using it in the short term), but replaced them with proper stainless, pan-head bolts for assembly of the side tables. I used bolts that were long enough to go through the rivnuts in the stove so that I could secure them in place with washers and nuts, fixing the bolt in place such that the side tables are very secure, yet are still easy to install by hand. Realistically, this should have been done at the factory. 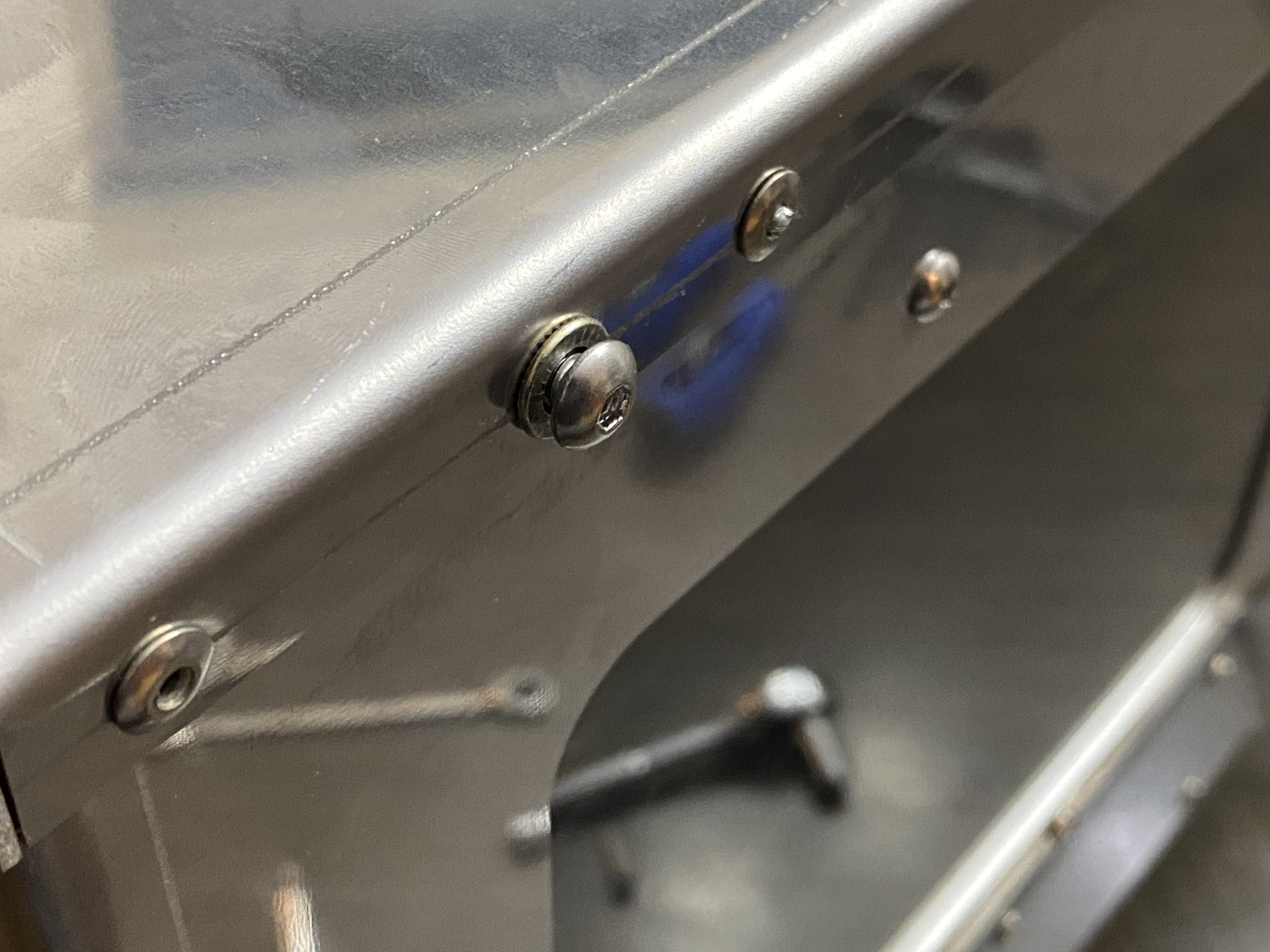 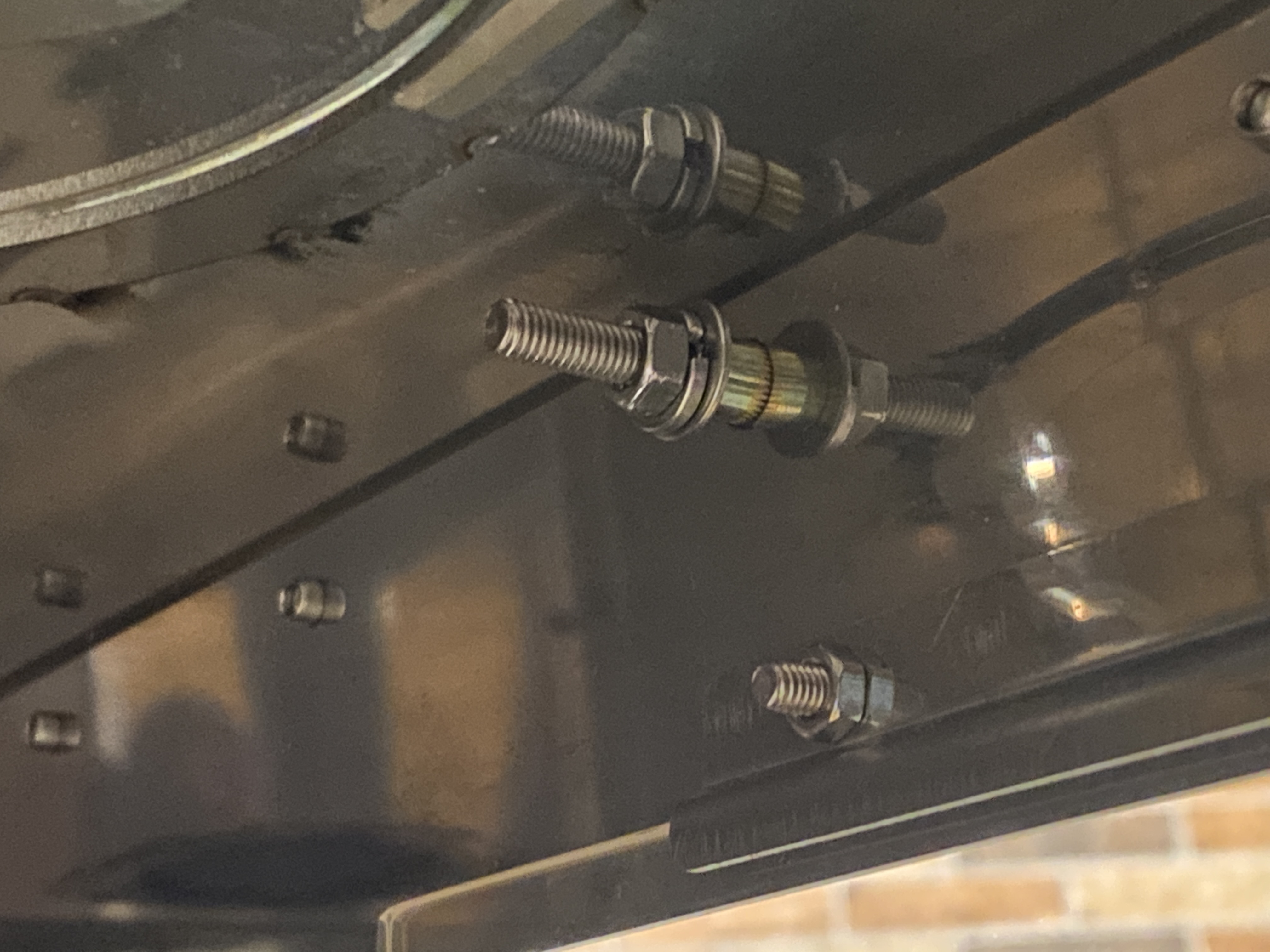 The biggest complaint is that the legs under the stove are not level. One of them is not formed/bent properly, resulting in at least a 3mm gap under one end of the leg, and a shaky, unstable stove. Quality control of these legs should really be improved. 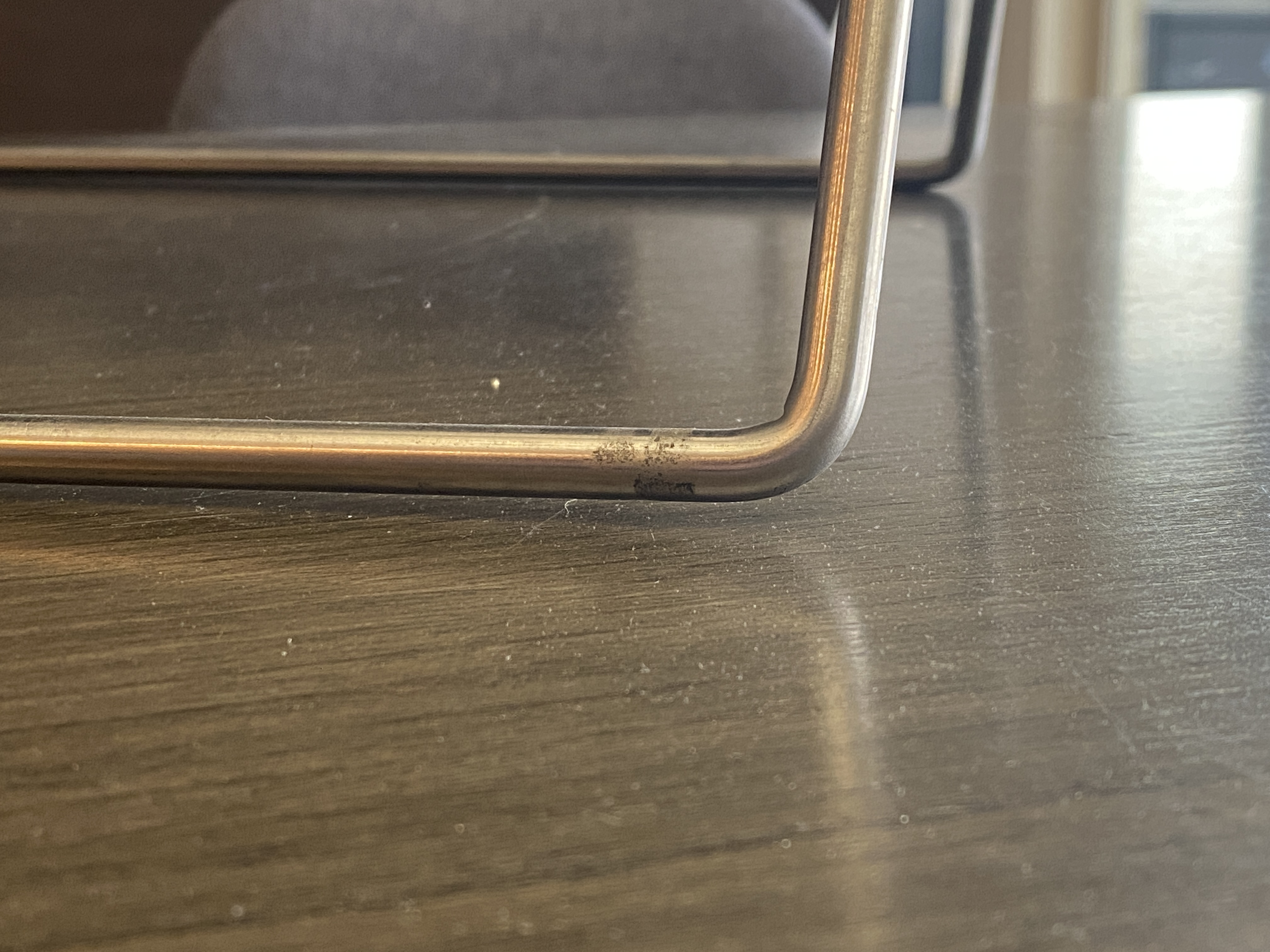 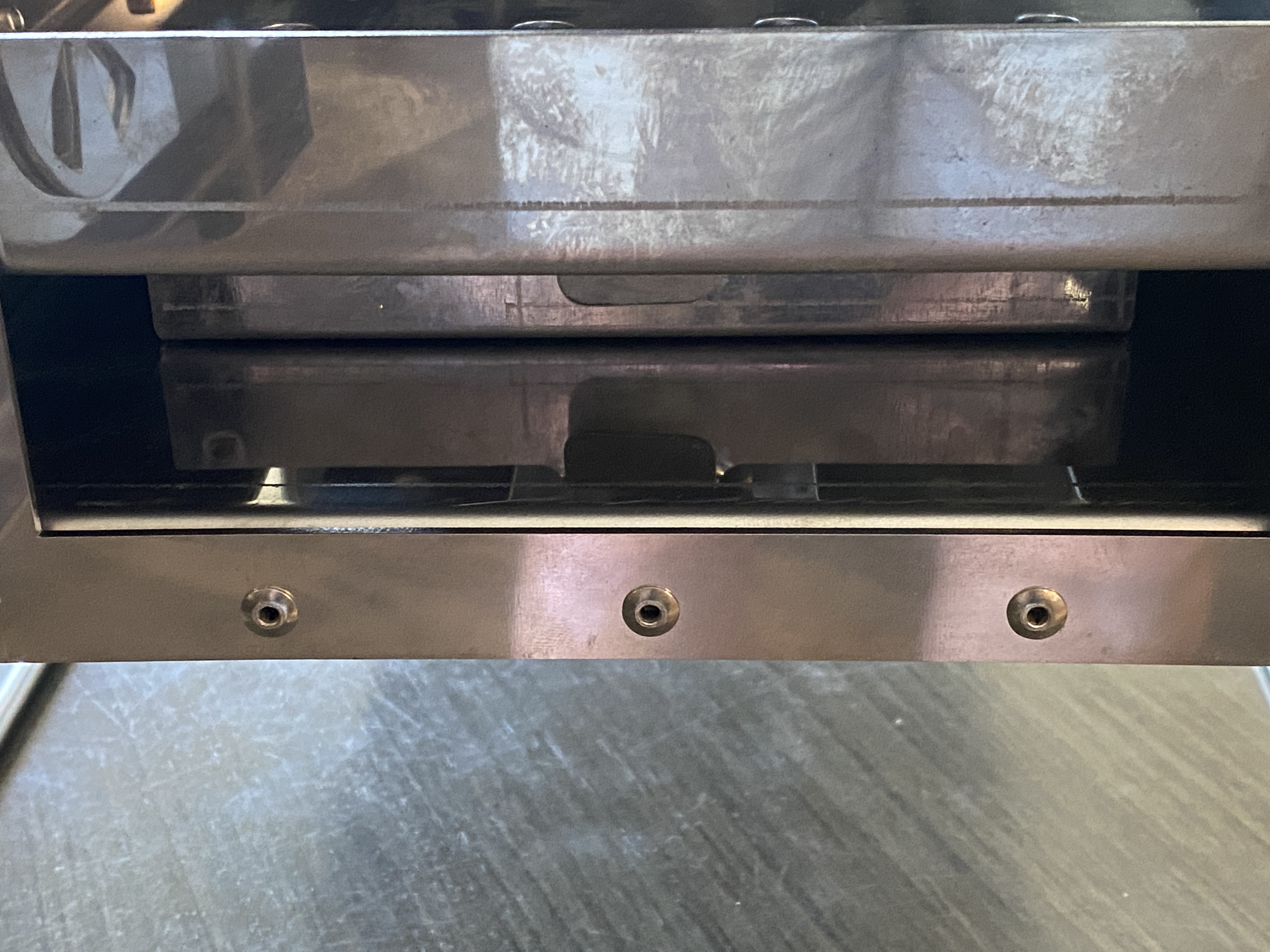 The tray is also a good 2" too short (presumably for better airflow at the intake), which means it'll be difficult to pull out when needed. Lastly, it doesn't have a vertical wall at the far end; this is likely so that it's easier to brush off ash, but will almost certainly result in spilling that ash before it ever gets to be disposed of.

It would have been better (although also more expensive) to have the front door and ash tray as separate openings, so that the ash tray could be made wider and longer. 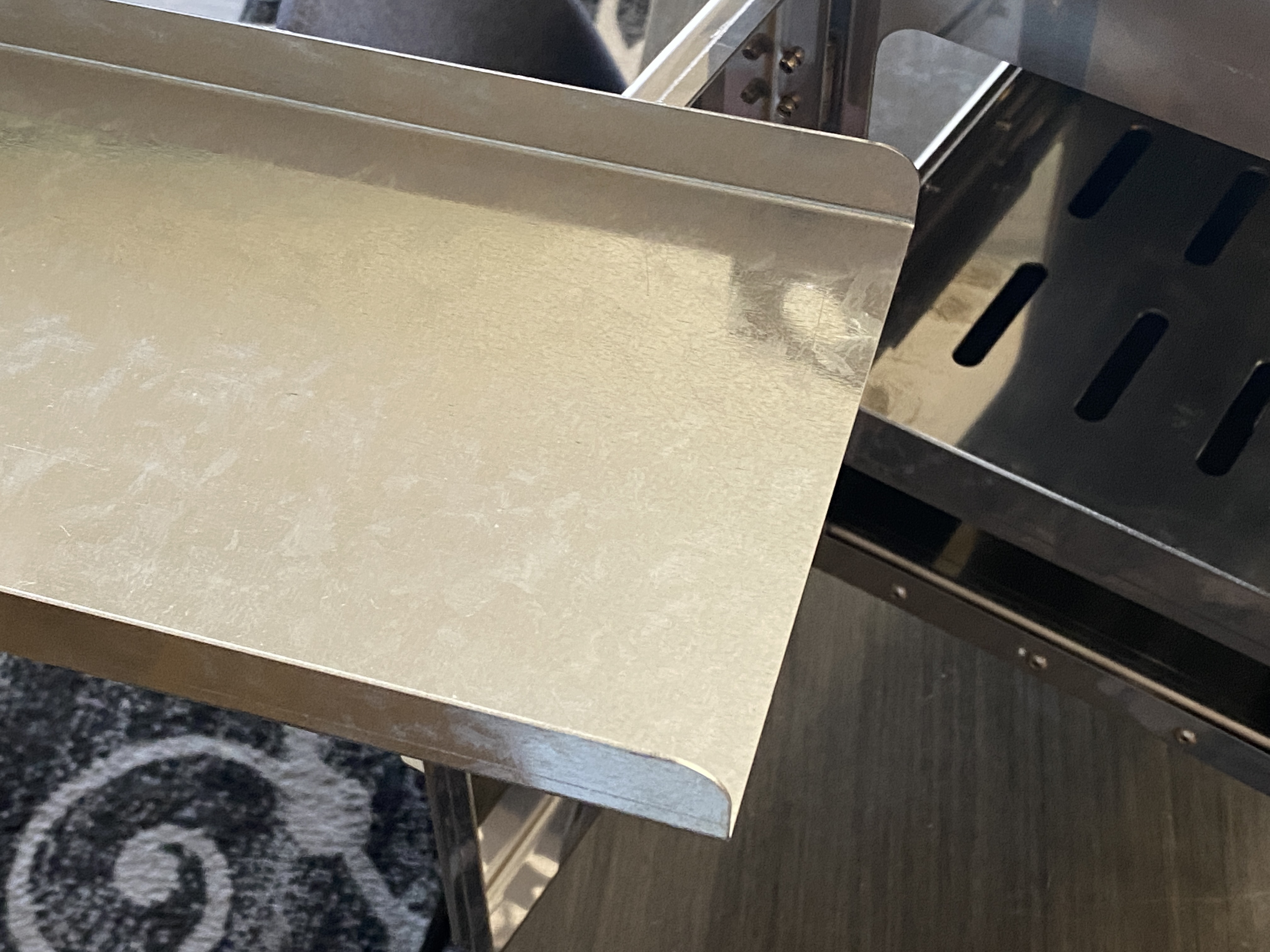 I tried a trial-run with the stove on my patio and things went well. It does put out a good amount of heat, fits quite a lot of firewood, and the stainless quickly started taking on a nice patina. 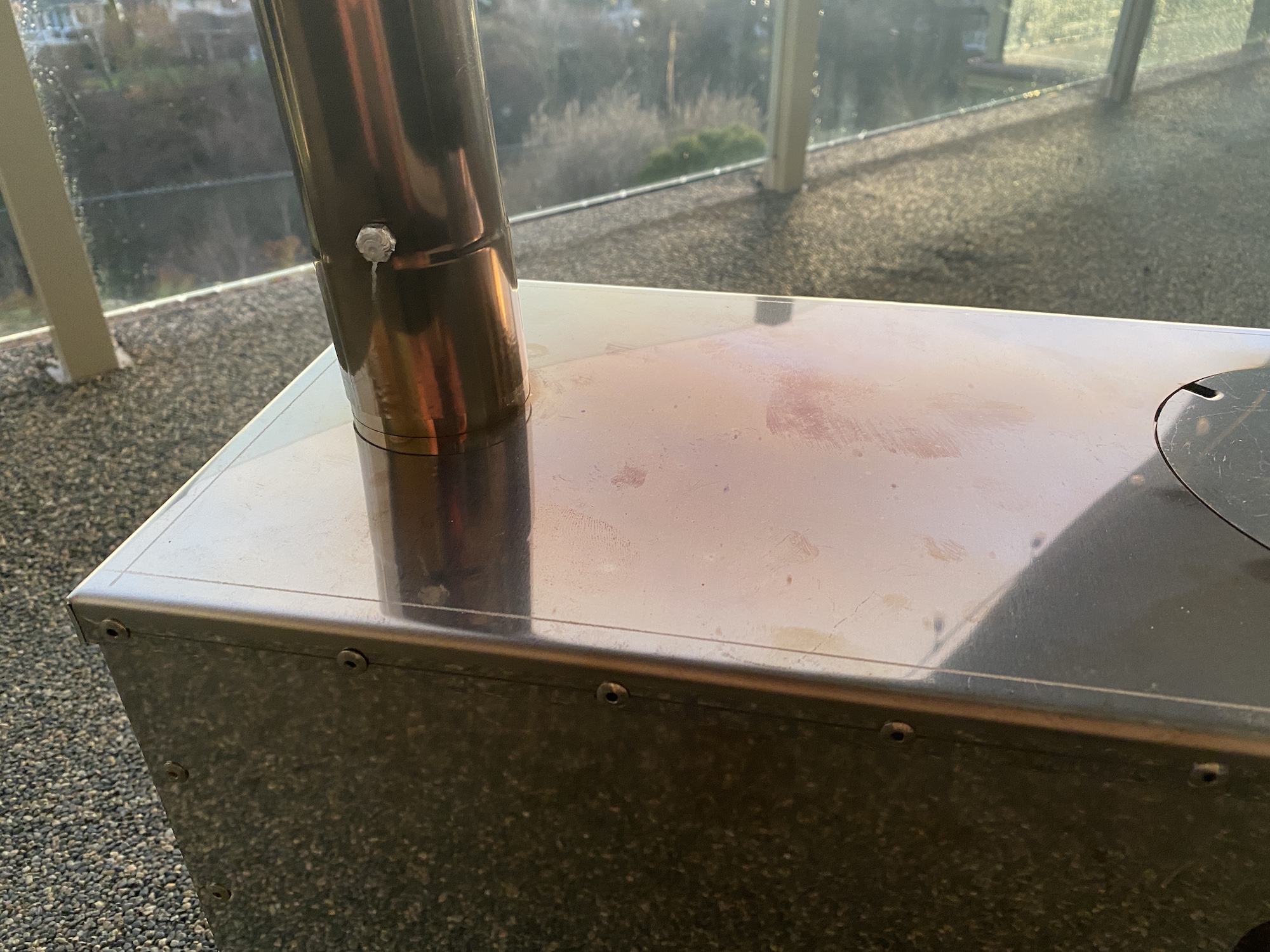 All in all, I think the stove offers pretty good value and should last a long time. Looking forward to using it in the wild! 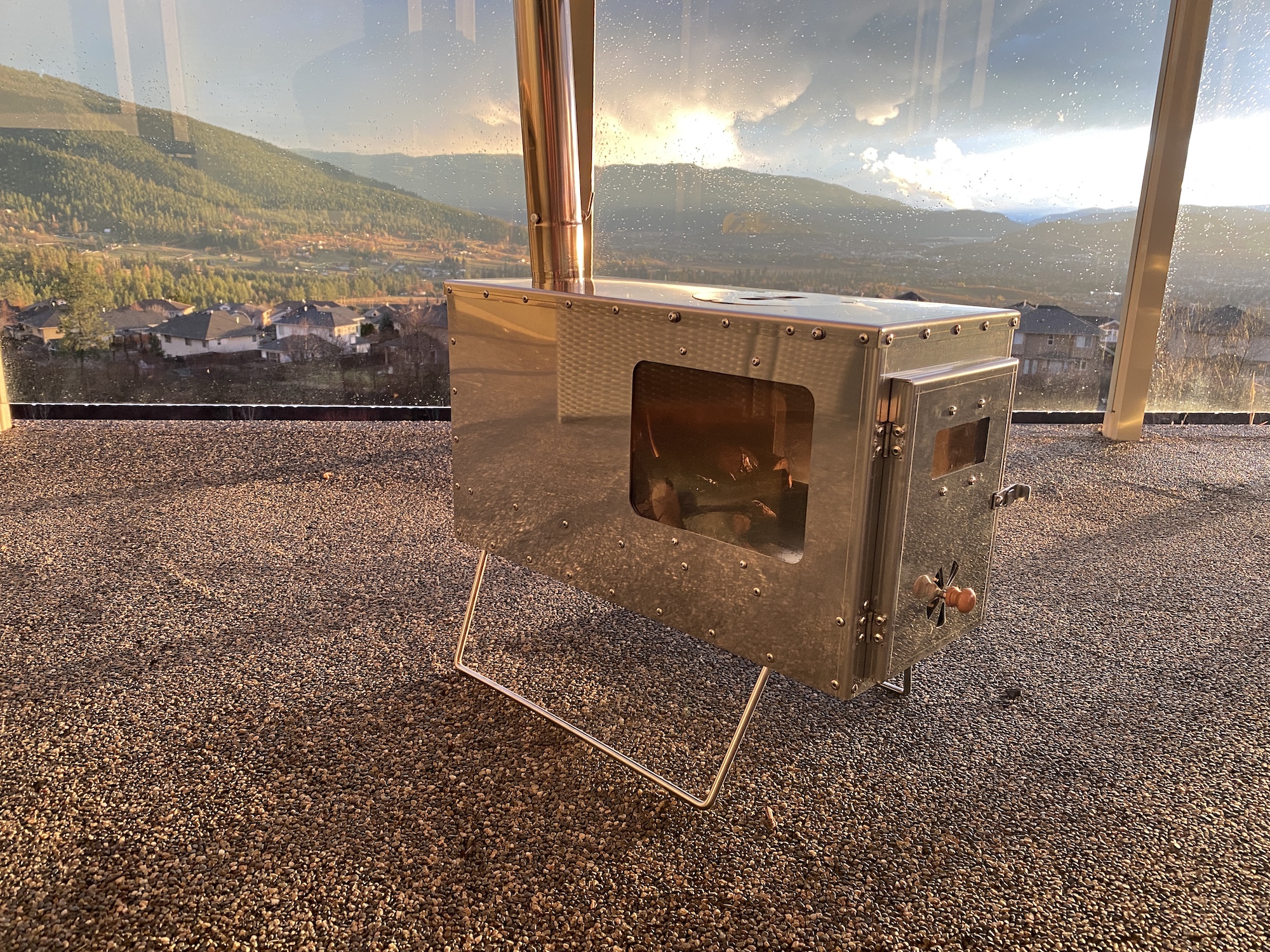 I reached out to Backwoods Glamping about the uneven stove legs; they read the message, but it took them 5 days to actually reply. The reply stated they'd look for replacement legs and get back to me - three days later, silence. Their communication is definitely lacking.

Unfortunately after going through 3-4 burns, I've discovered some practical limitations/problems. These problems compounded, and I came to the conclusion that this stove will not work for us, and so sold it at a loss.

Problem 1: Soot on windows. No matter what type of wood I burned, no matter how dry it was, all three windows would be completely black with soot within 30-60 minutes. The windows were so black that you could not see the fire/light inside the stove. This defeated the whole point of getting a stove with windows: light, ambiance, and ability to see the state of the fire without getting out of bed.

The windows have to be removed to clean out the soot. Removing the windows takes about 5 minutes, but this is not a process that you want to be doing regularly: the metal brackets that hold the windows in place slightly damage the glass, and that damage will get worse the more times you remove/reinstall the windows. The first time I was removing the windows, one of them cracked right in half, and I had to buy a replacement from a local glass shop at a cost of $80. High-temperature glass is expensive!

The windows then have to be vigurously scrubbed; I used a metal bristle brush in a drill. Cleaning three windows took an easy 30 minutes after each burn.

Problem 2: As the stainless steel heats up, it starts to slightly warp, but the glass does not. This results in noticeable gaps between the window and the metal sides, allowing for air to enter, and sparks & combustion-produced gasses to escape. As the metal cools down it returns to its original form, but it's no good to have these gaps while the stove is burning.

Problem 3: The exhaust pipe that comes with the stove is 2.5" in diameter, and is a single-wall construction. The small diameter means the pipe gets hotter than a wider version would. This poses an increased fire risk. I visited two local metal fabrication shops and two fireplace shops: none had such pipe available, so finding a 45-degree elbow proved to be impossible, and would require ordering from specialty shops.

Problem 4: The exhaust is only 74" in length, which is not enough to go through the roof of a tall tent and clear the same tent by a decent height. Additionally, the short length limits the exhaust draft that can be achieved. The staff at one of the fireplace shops explained that a stove such as this should have an exhaust length of at least 11' (nearly double what this stove had) to result in a proper draft that would minimize soot buildup, promote proper combustion, and suck out the bad gasses.

They also explained that I would need to burn this stove at a high temperature, with as much airflow as possible. This is the opposite of what my plans were (slow burn & long time). At "full blast" I could only count - at most - on a couple hours of burn time, and that simply won't work for keeping the tent warm overnight.

All in all, my prior lack of experience with wood stoves and some stove-specific problems combined to make it clear that getting this stove properly setup in my tent is not worth the effort and expense.

The next heating attempt is in the form of a portable, diesel heater.